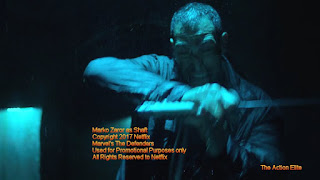 Above Photo: Copyright 2017 Netflix-- For promotional use only, All rights reserved, this entire interview will also run on The Action Elite

In a special interview, the amazingly humble and hard working Marko Zaror sits down with Dan Templegod, and chats about his role as Shaft in the sensational Netflix series: Marvel's The Defenders. Watch for more on Marko Zaror in the near future including an autographed photo contest. Please read his two other in depth interviews on The Action Elite, for more additional information on Marko and his film career.

DT: How did you become involved with the Defenders series, and had you watched the four shows leading up to it on Netflix prior?

MZ: I knew that they were looking for an actor/martial artist for the Defenders series, and then I realized it was Matt Mullins. He is an old friend of mine we used to train together. I sent him my material and he contacted me. He sent me to the audition, I got the audition and I was thrilled to be working with an old friend. After so many years as friends working out and training together since the time we were youngsters. Having seen how everyone has grown up and how they are making a living with it. It is very nice to see how people accomplish their goals and dreams. There was a charged energy on the set, I The entire cast and crew were very professional on set and I was excited to work with them. I was very thankful for him to recommend me for this. As for the shows, I watched Luke Cage, a couple of episodes, I saw Jessica Jones a couple of episodes, and I watched the entire season of Iron Fist. It was thoroughly enjoyable and thankful to be a part of the Marvel Universe!

DT: Chat about the initial arrival in New York, and the rehearsal, looks like you got to work with an old friend of mine Lauren Kim.

MZ: When I arrived at the gym in New York Matt and his team had the choreography done. The action sequences were ready for me to learn. I was so happy that Lauren (Kim) was there because not so long ago we were training together at a Gymnastica Olympia in the Valley. Because we shared some training together we got to know one another. Lauren is a very cool lady, and an incredibly talented lady. It is truly astonishing what she can do, the explosiveness, she has and the ability she has is amazing. I was very happy I had the opportunity to work with her. Of course we did the rehearsals, but I added some ideas, making sure of course to show Matt and see if he liked them. Basically adapting the choreography to focus on your strengths as a performer. That gives you an idea of the action structure, and yes it was arranged prior to my arrival. The choreography was great, I just had to learn it.

DT: Describe the day of the shoot, perhaps share a story from the set of Defenders.

MZ: The day of the shoot it was very intense, we had to repeat it many times it was raining, and the conditions were not ideal, hard challenging location, but we of course adapted, and that made it all the more realistic. The shoot was demanding and we were running on Adrenalin and we had to stay warm as it was pretty cold on location. Ultimately it was a lot of fun, I was so happy to see the way it turned out. I realize that I had a rather small appearance in the opening show but it was so cool to be a part of this amazing series.

DT: You mentioned you would love for Shaft to be brought back for future series in the Marvel Universe, what are some of your ideas?

MZ: Yes of course I will like to have a little bit more appearances, haha. The most important thing for me as I know it was a short stint on the series, is for me to explore my abilities and to work with a wide variety of experienced people. The film business for me is like a marathon, a long run, showing my passion and showing how much I love what I do. This also allows me to meet more people and to expand my circle of connections and people who know my work. Working on Defenders was a fantastic experience.

Of course if they want to bring Shaft back you never know in the Marvel Universe. The world of Marvel is massive, they have so much content. Maybe they travel back to the past in future episodes so we see the character's life before the first episode of Defenders. Ultimately Marvel and Netflix are great companies and I was so happy to work for them and display my abilities, sharing with the talented people who work on the series and the loyal fans.

DT: Chat also about your working relationship with Robert Rodriguez, seems like an amazing guy, and very supportive.

MZ: With regards to Robert Rodriguez, of course he has been extremely supportive of my career. He is a great guy and a tremendous inspiration for me. He has been and inspiration and influence since the beginning of my career. Being able to work with him and develop a work friendship and relationship is so important. I am always honored and excited to work with him I am really excited about Alita: Battle Angel. Of course I am thrilled to be able to be a part of the Dusk Till Dawn series. I had a really bad ass role as the Aztec warrior. Definitely check it out, it is available on streaming platform now, really cool show. The Man at Arms show was really cool and exciting, I got to use weapons. Robert always has cool ideas of putting the actors in fun and interesting situations I really enjoy working with him.

https://www.youtube.com/watch?v=OX0FLR3lYcM Interview about Dusk Till Down

DT: What is in the immediate future for you, I know you recently completed work on Man At Arms, are you working on new material for El Rey Network?

MZ: My immediate future is every day, wake up, be thankful, positive, and train. It is important for me to be ready and stay ready. As far as projects I want to be honest with what I do. That is why I am creating projects now. I have some which I am shopping them around to different networks. I am excited about the impending release of Alita: Battle Angel which will release in 2018. Every project I do I commit 200 percent, so it is of the utmost importance to stay honest and focused with my dreams. I want to be ready to be adaptive to what ever life puts in front of me.