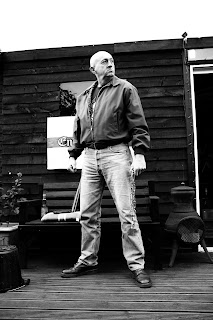 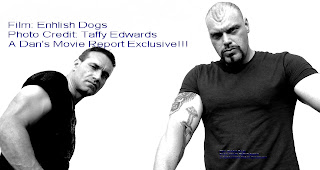 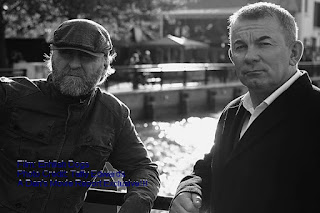 Above: Hot, black and white photos of the men in the action of English Dogs!!!
Photos: Taffy Edwards  A Dan's Movie Report Exclusive!! 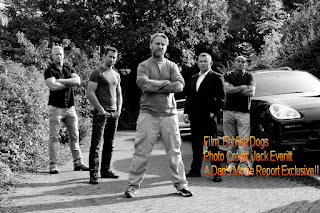 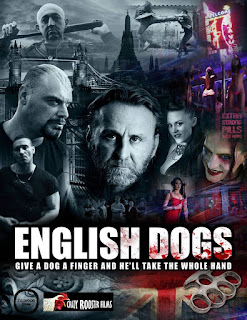 Greetings valued Dan's Movie Report Readers, get ready for an exciting new film 'English Dogs' !! From the creative minds of director Taffy Edwards and exciting action stars Byron Gibson comes this bad ass film delving deep into the illegal steroid market. Below is the official press release above are the hot new photos from director Taffy Edwards!Byron Gibson reports that more films in the series are actively being developed and a behind the scenes documentary will be online in the coming weeks! Watch for more on Dan's Movie Report

British Actor Byron Gibson (from Only God Forgives, General Commander) is here with a new hard hitting, gritty film franchise called “English Dogs”. The film features Ron Smoorenburg (from Jackie Chan’s who Am i) who boasts the World’s highest kick and won The Hong Kong Stunt award.  Smoorenburg choreographs the action in this feature which is both brutal and stylish. Smoorenburg doubles up and acts playing his first ever lead role as the character of “Dutch”. All actors were required to do their own stunts and there were no stunt doubles. The film also features Dave Blazejko (from Sky Hunter) former Sydney’s Strongest Man and Eoin Obrien (from Never Back Down).  Editing by Undatebles star Brent Zillwood and Directed by Taffy Edwards.


Harrison played by Byron Gibson is a foot soldier for a notorious gang calling themselves "The English Dogs "who specialize in Armed Robbery and Extortion.


Harrison is set up by the leader of the gang and his ex-wife Tracey at a fight meeting. He then is brutally attacked by a 130 kg enforcer of the dogs called Dodgy Dave.


12 stitches later  a broken nose he escapes to Thailand. There he meets “Dutch” a criminal kick boxer from Amsterdam who Introduces him to a the World of illegal steroids.


They become one of the biggest illegal steroid suppliers in Asia.


Based on a true story.


A trail of destruction and mayhem starts with one thing on Harrison's mind.


YOU GIVE A DOG A FINGER AND HE WILL TAKE THE WHOLE HAND!


Damian Mavis as Joe the Pimp.