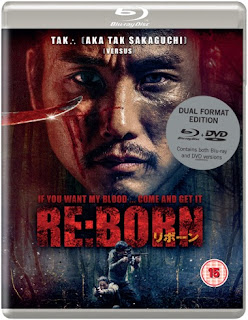 Greetings valued Dan's Movie Report readers. The initial U.S. screening of the action film Re: Born took place Friday August 10th in Austin Texas at the IDTV Action Fest. Since this is a really early review and no other U.S. Outlet has seen the movie, I have decided that this will be a more concise description of the film, with no plot spoilers, nor any really detailed information.

Reborn represents an achievement in action and tone. To me it has a bit of the tonality of the original movie The Crow. Reborn is dark, brooding, yet with a glimmer of hope. The actors move through the scenes, like a silent glider on a stream of air, yet when the time is right to touchdown, the landing sometimes can be a bit rough! The violence in Reborn is very stealthy, fighters approach with little fanfare and in a flash they are dispatched.

Tak Sakaguchi wears many hats in Re:Born, as he wrote, starred in, and choreographed the action. Tak is in expert in action, and seems to allow other actors their time to shine as well! The action is ultra violent and probably the in the TV MA or hard R rating. Also in some ways this film can be considered a supernatural horror film, as the character is literally named Ghost and moves like one.

The description of Re:Born is found on the Official Website @ http://udenflameworks.com/reborn/en/story.html
In fact on that site, fans can view the entire production process, many photos, full cast information as well.

Although the one man vs an army plot has been used in several films, in Re:Born however, the fighting is followed by calm moments, almost like a reluctant hero, yet with honor and purpose. A couple of scenes stand out, for action. We see a calm placement of a dinner in a microwave, as many thugs approach quietly inside a small store. One by one thugs are dispatched using various items in the store. What is cool is it is not a melee, more of an appear then disheartening act to remove the next thug, each in creative ways. One thug breaks a bottle for a weapon, yet the bottom of the bottle is eventually how he meets his demise! Another cool scene is in a phone booth, he is calling Sachi and is calmly speaking, and up walks a seemingly innocent school girl, except haha, she has a knife and there is a struggle, let us just say it was rather creative, and as soon as things are wrapped up so to speak he completes his call! Again, creative action, clever dialogue, a zen feeling wrapped up with the dichotomy of action!

Minor gripes about the lighting in the film as it is pretty dark, I think some corner lighting and a small overhead light would have illuminated the action a bit better. The action is fast, and crazy yet, Would have liked to see some more creative camera angles, maybe more overhead or slightly to the side over, Again this is really nit picking as fantastic as the film is. 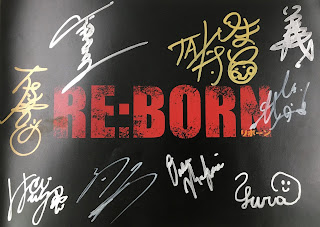 Above: RE: Born autographs from the official Facebook page of the film.

Remember this is a subtitled film, not dubbed, thankfully. Although I only speak English, well somewhat ha, I feel that always watching a film in it's original language is important to get the vocal inflection. When a character is angry, sad, happy, or pensive, the audience can feel their conveyed ideas. Re: Born has a good amount of dialogue including one of the characters in a wheelchair so, we can witness his pain and suffering, yet a glimmer of hope, all through sound of voice.

Re: Born is a film that pushes the envelope, yet seals the same envelope in a solid package. I am interested to see how the rest of the World and of course a U.S. Audience will enjoy it. Re:Born rates a 7.5 out of 10, a must purchase! The film unleashes to the USA September 24th!