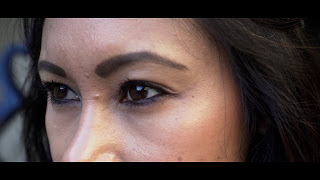 Above: Lauren Mary Kim in promo pic for Kali Diaries 3.

Greetings valued Dan's Movie Report readers, I hope your week is going great, once again another exclusive interview! I first heard about Lauren Mary Kim in 2002 when she was a dancer! She has worked so hard to become one of the top stunt action specialists in the business today. With all of the projects she has done for other people it is nice to see her develop Kali Diaries series for herself and to further her own skill and creativity. The latest version, Kali Diaries 7 is on a new platform called Deadly Dymes which allows the users to monetize their own video and has exclusive content. For the first time ever I sit down with Lauren and she chats about Kali Diaries and her new ideas in action-- Get violent, get rough it, is time to go a few rounds with Lauren, textual ass kicking commences now!

DT: Chat about what led you to create the Kali Diaries series, I remember you mentioning that the initial training was for a stunt job?

LMK: I created Kali diaries for a couple of reasons actually.  One reason was that I was starting my training at the Inosanto academy under the famous Guro Dan Inosanto which encompasses many martial arts but I study silat, Muay Thai, Filipino martial arts and  jkd there.  I wanted to see my progression as a Martial artist under these disciplines.  So it was for myself originally.  Second reason -Being a stunt woman in film and TV is difficult.  I felt like at times  I had no creative voice as a stunt double.  I finally wanted to have control over a project for once and do choreo that I loved  or moves I've always envisioned doing in a fight. Also as a stunt double many edits of fights are geared more towards the actors coverage. Which makes sense because they are the star.   But sometimes that meant the action in the scene would suffer in order to cater to actor's coverage. I'm not saying all actors are bad because some are actually quite talented with action scenes like Elodie Yung and Lana Condor.

DT: How have the various films helped your own career out while assisting the other talented individuals, I look at the short films like an action reel in themselves.

LMK: I definitely think these fights have helped with my career.  It has showed people my abilities who had no idea what skill set I had

DT: Chat about the initial meetings you had prior to shooting the first Kali Diaries film?

LMK: I had a vision one night and couldn't sleep because my mind was buzzing with the idea. I just asked a couple of my friends to help me out and here we are today.

DT: Kali Diaries 3, was my personal favorite of course up until this latest one, chat about pitching the idea to Amy Johnston and some of the prep time in Kali Diaries 3?

LMK: I had an idea of doing a superhero stunt double fight one night.  Tagline... "What if Elektra fought ________?" Marvel's Defenders was debuting soon and I wanted to shoot something to also promote that.
I was working with Amy at the time on a job and was explaining to her my idea.   Originally I was thinking of male stunt doubles to fight but then it donned on me that Amy was one of the stunt doubles for Black Widow.  Of course the main double is Heidi Moneymaker but she is always unavailable and out of town.
Tsuyoshi Abe and I met one day to brainstorm an outline of the fight.  Then the second day we had Amy come to rehearse and we made several revisions to the fight.  I scouted locations and bought wardrobe that was tee shirts with our characters on them.  We shot with Bryan Sloyer and the shoot time was about 5 hours ?  I can't remember it was so long ago now.


DT: I had a blast seeing the film, and am glad I submitted it to a few festivals, you told me about your surprise about the response, actually I was not ha, chat about some of what happened after and how it led you to create more in the Kali series.

LMK: Well Kali diaries won best fight Choreography at the Artemis film festival thanks to you of course.  We had such a tremendous feedback and the fight was re-posted many times on Instagram, fb and YouTube. Several articles were written on our fight including MCU, nerdiest, CBR, etc etc. It inspired me to do more of course.  I knew it wouldn't be the end.


DT: Very cool about Kali Diaries 5 the Capoeria edition, chat about the formulation and creation with that one.


LMK: Actually this fight was suppose to be apart of a bigger project. Which I'm currently in Production now.  But of course my vision changed and decided to do this as a stand alone fight.  You'll know what I'm talking about once I release the bigger project but it's kinda a secret for now.

DT: OK, a secret and I am not one to challenge you to divulge it! Chat about some of the logistics with producing the episodes in general, I know you told me that this new one End Game had the biggest budget. 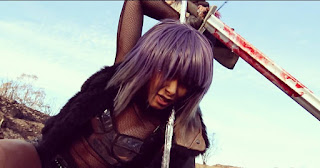 LMK: Yes , i pretty much do all the "producing" of these projects bc it is my project. Finding locations, whether free ( pulling favors or paid locations) purchasing wardrobe for talent, hiring camera operator and editor, fight Choreographer, finding talent, .  Etc. Etc. A lot of work and money that people don't think of.


DT: Chat about how you became associated with Deadly Dymes? Seems like a cool chance to monetize your videos and see who is watching. Chat about the initial response to the new video.


LMK: DD saw my original fight with Amy and was interested in having me do a fight exclusive for them. It was a perfect way to potentially make money for all our hard work, talent and efforts.

DT: Working with Vlad Rimburg on this new video, chat about his camera work and technique, he knows how to shoot action as he is a choreographer as well. Perhaps chat about some of the set ups and takes you and Amy did.


LMK: For this recent fight Vlad shot and edited KD 7: End Game. Alvin Hsing and Brendan Huor choreographed.  I handpick everyone I work with because I'm very particular. I trust my team ! 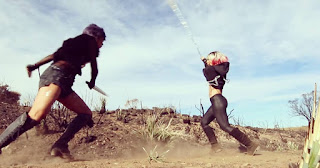 
DT: Chat about the choreography on Kali Diares 3 vs Kali Diaries 7. Both with Amy Johnston. 7 with Alvin Hsing & Brendan Huor, 3 with Tsuyoshi Abe& Bryan Sloyer. What attracted you to working with them and how have their techniques enhanced your skill.

LMK: Lol see above answer ! I think it's important to use different people to get a new outlook of things. No one is better than the other, it's just different style and abilities. We all have strengths in something.


DT: Working with Amy Johnston, chat about the dynamic, this is the second Kali Diaries film you have done with her. As a writer I really enjoy her work in action and in acting,

LMK: Amy is one of my faves to work with and we have fought each other several times actually. She's super easy to work with, considerate, and I trust her. Plus we always have a good time and laugh a lot together on set. She is a class act and a true star. I'm excited to see her career accelerate even more.


DT: Chat about some of the ideas for Kali Diaries End Game, how long did it take to film, edit etc...?

LMK: I've always wanted to do a burning man esque apocalypse type fight.  The shoot took 5:30 hours to shoot. I don't usually give Vlad a deadline.  But he finished in a couple weeks.

DT: Cool, Vlad is great shooting ladies in action. OK Lauren chat about the future of Kali Diaries, do you ever seeing it expanded to a full short series with dialogue, and a story line not just the fights?


LMK: Yes it is ever expanding and evolving. I guess you'll have to wait and see!!


DT: Chat about who else in the action world you would like to have on a future edition of Kali Diaries?


LMK: I think it would be amazing to fight Jeff Imada !

DT: Very cool guy, he is! Thanks again Lauren for another amazing interview! Watch for more on
Dan's Movie Report and my partner in action action-flix.com !!

For episode 7, www.deadlydymes.com (It is free to join, but videos require credits to download in 1080p) Well worth the time to support indie short film makers. Here is my review: This review has all of the information about Episode 7. http://dansmoviereport.blogspot.com/2019/01/kali-diaries-7-end-game-2019-movie.html
Posted by Dan's Movie Report-Danny Templegod at 7:02:00 AM