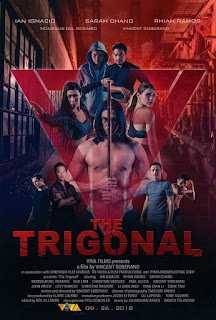 Above: Poster for Film! All rights reserved, for promotional purposes only!

Greetings valued Dan's Movie Report readers, Although I did an interview with actress Sarah Chang for this movie a while ago http://dansmoviereport.blogspot.com/2018/08/actress-sarah-chang-interview-2018-dans.html , signals got crossed and I never was able to view my copy for review, that said I look on IMDB and lo and behold zero reviews, I am calling this outside of JoBlo, a Dan's Movie Report IMDB exclusive and, by far the best Filipino Film EVER!

Here we go! I was all hot and lathered up about watching Buy Bust and reviewing it, especially after hearing many people on the web chatter about it. After watching it, I decided not to review, I totally respect the hard working people who made it, but again, I am not going to slag a film I disliked when other great films are out there. 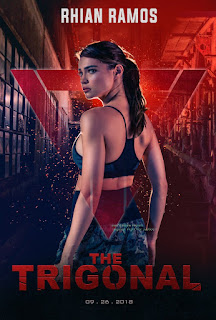 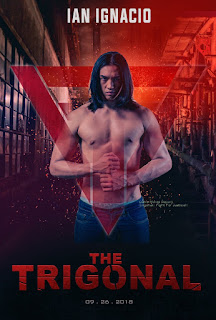 Above: Lead Actor Ian Ignacio  and lead actress Rhian Ramos go through an emotional and physical hell in Trigonal!

Phase one story. The Trigonal (I will refer to the film as that for the balance of my review) sets up it's lead character with heart and emotional concepts, We get more than the typical 3 minute plot opening and then right to the action, we get a life prior to. We see a husband and wife together, happy naturally sharing life. A family bond is established. Interestingly enough, the fact Trigonal gives the audience time to breath and enjoy the joyous surroundings. 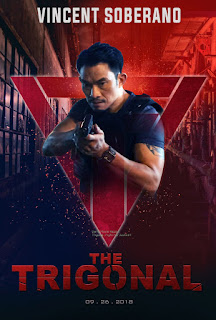 What is cool is the entire city, was involved they got cooperation from local law enforcement, thus no surprises! This also allowed for Vincent Soberano, who wrote and directed the film to have a cool character of a law man, who is actually SMART! When does this ever happen in a crime action-drama, that would be never! Yep In Trigonal, the law asks for tips from

The lead actor Ian Ignacio who portrays Jacob Casa is amazing. He is shown going through a full gamut of emotions from tears to rage when his wife is attacked, again no spoilers, let us just say although he was also in Buy Bust, Ian has a chance to show his real range in this film! Basically he is forced to fight in a tournament, yeah it is not all what you are thinking, as multiple stories rage on about this tournament. Special drugs from corporate fighters, crime, wrapped in a human story, I say no more! 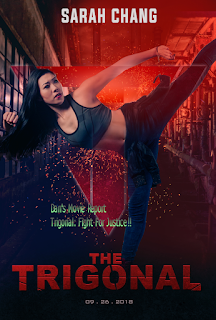 Above: Sarah Chang! Top action coordinator today in the Philippines, and she is a great and natural actress, humble and hard working!

All is not entirely serious, and this is a good thing! Actress and stunt coordinator and fight coordinator Sarah Chang brings her self and her adept team in! I am serious! Once the action starts Sarah turns on the sarcasm and the violence, no spoilers! The dialogue she gets to say, has many references to interesting action movies of years gone by. She is like the nerdy girl, yet serene, another very complex character. I will chat about one scene as Sarah is shooting pool badly, ahahah, when thugs come into the bar she hides under the pool table a true laugh out loud moment! Again no spoilers as to what happens next!

I really like Rihan Ramos as Annie Casa, her portrayal of the innocent wife who also owns the Dojo with her husband, is heartfelt and honest, she is a pro actress, and gets in a bit of action in the beginning herself! No Spoilers!

Yes there are villains! Of course there are, A copious amount of fighters dot the landscape of Trigonal. The final third of the movie is an all out action assault in the yep, TRIANGLE shaped ring haha!

No Spoilers! The lead villain is a colorful character who rolls very heavy with two very large powerfully built women as his private attache! Boom! Enter Leigh Guda who I interviewed 6 yrs ago for my site, again she is a fitness person and not going to lie I was thrilled to see her in front of the camera not just training others! Leigh has honor, power, and channeled a rage, again she had zero action and fighting skills prior to this film but Sarah Chang worked hard to train her, now she has continued it! She looks the part of massively rough menace!

You have evil chemist and many other bad guys!

Part 2, the quality of the filming, I could see everything clearly! Yep, even dark scenes were lit in such a way to see the action, like corner or side lighting. In Buy Bust I turned my Netflix brightness to max and still it was a blur of blackness. UGH! Trigonal powers through with excellent top notch rate camera work from the entire team of which Jeff Centuari is a part of! He knows how to film action!

The sets and look of Trigonal are of high quality and easy to see, nothing is hidden, You see a serene temple, a hospital, a fight arena, a Dojo, this is not the claustrophobic film, it is shot in various locations so added a more epic feel to it.

Between the great story, easy to like and easy to hate characters, Trigonal: Fight for Justice is a win on so many levels, despite the difficult road to make this film, it was well worth it! This is my Dan's Movie Report action special mention, indie budget, solid acting, and great story, coupled with the best action coordinator working in the Philippines today Sarah Chang, yep I will say this she worked 20 hour days, always smiling, building others up not tearing them down, honor in action! I got this film at 2am and watched til 4am last night and watched again, then again! Each time noticing more nuanced things! Repeat watchability factor is very high, Trigonal: Fight For Justice rates an 8.5 out of 10 yes it is that freaking good, now I hide under a pool table an wait for fallout from the wannabees never was people and the internet trolls haha! Smile in the face of anger, be serene be Sarah Chang and Vincent Sabrono!