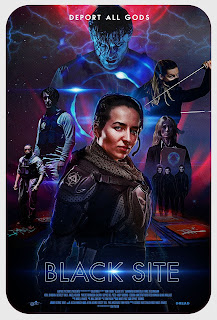 Above: Poster for Black Site, (C) 2019 Epic Pictures/Dread used for promotional purposes only

Sometimes fate is more interesting than life! I was curious about this film awhile back, as a very early trailer dropped in 2017 (https://www.youtube.com/watch?v=YnDbYHRGqao), but when I saw a September 2018 release date and never saw the finished film, only in festivals. I was not sure it was going to be be released on DVD or streaming services.

Enter the amazing Epic Pictures in conjunction with Dread! Black Site will finally be unleashed April 9th, 2019. There is also a limited special edition Blu-Ray which is Region Free, has director commentary, deleted scenes and all of the Dread trailers to date on it, link at the end of the review.

Whew...on to my review. Black Site is one of those tense brooding, Dario Argento build up films. Writer/Director Tom Paton crafts an undulating story, mixing sci-fi, horror, and especially near the end a whole boatload of action!

Although the plot is basic, how the story unfolds and the eventual outcome is what makes Black Site entertaining. Essentially the entire film takes place in an underground, long abandoned research center that has been re-purposed to send beings known as 'Elder Gods' back to their own realm. Much like a 'weigh station' or holding place, prior to transport.

The character flaws of people who work at the facility are made evident, One person is relegated to a certain area due to her PTSD, and is passed up for promotion. Very often lower budget movies never take this kind of time to develop the characters, (Incidentally many strong female leads), and in Black Site a solid 35 minutes is taken for the set up to the action!

Acting wise, the film is average, never bad, my only small gripe is more emotion perhaps was needed when a person in the film is killed off, but this never detracted from the enjoyment of the film. The other issue, I guess since I watch a lot of action films is, the way the fights are executed. I think that the choreography and actor fight training needed to be better. I am sure with a few extra days or a week of intense choreo, the cast who are all young and fit, would have no trouble selling the fights better. I am sure A LOT, has to do with budget. The thing is even a lower budget film, if you have a copious amount of fighting and inexperienced actors in the fight game, they need to be trained, case in point Zom Ammara, in Kill 'em All, she had zero training in any type of screen fighting, or real martial arts, and she was a central action character in the film, so the weeks she had training, worked, she was fit and looked bad ass on screen.

Not going to go into too much details, as I never put in spoilers, especially if a film is unreleased. I will give Black Site a strong rent, a 6.5 out of 10. That said, if you rent the film, and like it, def recommend buying the Blu-Ray as I am sure the additional deleted scenes and director commentary are worth the price.

Actually the Blu-Ray can be pre-ordered now direct from Epic Pictures, and is on sale now for $14.99! https://epic-pictures.com/merchandise/black-site-blu-ray