The Girl From The Naked Eye Movie Review 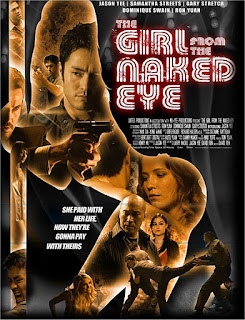 Above Pic: The Girl From The Naked Eye movie poster

Update 5-11-12: The Girl From the Naked Eye gets limited theatrical run!


Latin America Premiere! at The Fantaspoa Film festival takes place in Porto Alegre, BRAZIL from May 4th through May 20th, 2012.

For purposes of convenience throughout this review I will refer "Naked Eye" as a shortened form of the full title. The film opens up with a man crying, balling his eyes out as the wide shot reveals a woman, presumably his lady dead in his arms. The rest of the film is spent finding out who did this to her and why.

Naked Eye, plays out like a mystery, a detective story even referencing Nancy Drew at one point in the middle of the film. The protagonist Jake (Jason Yee) is hell bent on finding out the truth who killed Sandy (Samantha Streets) and tries to force it out of every person he meets. Jake is the driver. He drives the girls to their Johns, watches over them and was not there when Sandy died. We never know who the killer is, even suspecting that Jake may have been involved. Jake meets up with several seedy characters along the way and most of the time a full on martial arts battle ensues. This is where Naked Eye shines.

The fight scenes in Naked Eye are a spectacular display of human agility and takes this from an average flick to a must watch. Ron Yuan plays Simon, Jake's boss. In the beginning of the film we are lead to believe he is the killer. Yuan was also the action and fight choreographer and needs to be commended not only on the complexity of the fights, but the way they look on film. Director/writer David Ren did his homework and allowed the characters to show emotion on film, and obviously knows out the proper way to film a fight scene.

Sure some of the fights are outlandish, we see our hero taking on four cops with batons and besting them. Of course after seeing Ming Qiu doubling Lucy Liu in Ballistic: Ecks Vs Sever take down a half a dozen guys in riot gear, nothing in the movies is out of bounds. Flips, jumps, twists and turns occur at a lighting pace, and makes Naked Eye very entertaining to behold.

The only two issues I had with the Naked Eye are the narration, and the amount of flashbacks. The lead character does not need to explain to us what is going on. As the story unfolds, I would have rather seen it with his action. In fact the film's mystery would have been even stronger without the narration. The flashbacks are quirky, happening so often it detracts from the present day story. A back-story for the first 20 minutes or so would have set up the film and allowed the action to transpire more fluidly throughout the remainder of the film.

Those two small gripes behind, Naked Eye is a very good film. The action is fast and furious. The bad guys are ruthless, but so is our protagonist. There are several cool cameos in the film, from James Lew, Michelle Lee, and adult star Sasha Grey. The dialogue is witty, at times a bit silly, but works for the film. There is nudity as "The Naked Eye" is a strip club, and home base of operations for Simon.

Overall I rate The Girl From The Naked Eye a 7 out of 10, this is a must see. According to IMDB the film releases officially in April 2012. In the meantime point your browsers to the official page @ http://girlfromthenakedeye.com/ Or facebook page @ https://www.facebook.com/pages/The-Girl-From-the-Naked-Eye/123779963550
Posted by Dan's Movie Report-Danny Templegod at 11:10:00 AM