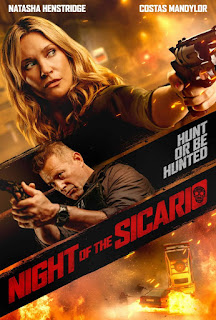 Above: Poster image for 'Night of the Sicario' (c) 2021 Saban Films, all rights reserved image not monetized


Greetings valued Dan's Movie Report and Action-Flix.com readers. Get ready for another 'Rapid Fire' review I promise this one will be spoiler free, quick and to the point. At the recommendation of a Facebook friend I went in blind to 'Night of the Sicario', not even viewing a trailer prior to watching. I had seen the other 'Sicario' films and honestly thought that this would be a loosely based sequel. I enjoy Natasha Henstridge's early work, yet have not followed her career much past the early 2000s.

Henstridge plays a nurse and owner of a large home based assisted living facility and she just happens to be in the path of a collision between drug runners and agents protecting a wife and child. The opening shows a chase and a shootout between agents and the drug runners. Seems promising, well sadly it is not. The movie devolves into a detailed character study of the senior citizens in the home and preaches about faith. Not that character studies and faith are not good topics, but in this setting, UGH.

Even in the beginning, which is con-texted to an oncoming hurricane, the bad guys flip over the car and they decide not to pursue after the father, daughter, and agents sneak off under an open garage and close it. The agents and the drug guys end up at Natasha's huge house, with an endless supply of doors and areas to hide. The little girl manages to find several of them.

There is somewhat of a cat and mouse game interspersed by various members of the nursing home either discussing the past or even attempting to stand up to the criminals. A very odd mix. 'Night of the Siciario' is just not intelligent enough to be a character study nor full of action and guile to be an entertaining 88 minutes. In addition, mixing faith based passages and a drug/DEA film completely devoid of swear words, made it seem like this was aimed at a church going crowd, but realistically it is just not enough of either. Do not get me wrong, there are very well written faith based and character study films, yet mish mashing all of these elements only frustrates the audience. I just kept looking at my watch and though I made it through the film, even the action at the end with Natasha getting kind of violent, did not move the meter much.

Overall, inspite of Natasha Henstridges really good performance given the source material, 'Night of the Sicario' is a hard pass and rates a 3 out of 10. I am going to watch 'Species' again this week, that should cleanse my soul of negative energy!