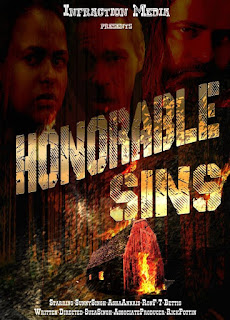 
Greetings valuable Dan's Movie Report and Action-Flix.com readers. Thanks to producer/director/writer Susan (Suza) Singh I was given the opportunity at an early review for her kidnapping/human trafficking film 'Honorable Sins' I decided to watch the movie prior to reading any of the coverage or watching the trailer.

I must say, Ms Singh took her time really telling a story and developing the characters. The movie has a 'slow burn', and focuses on the character development of the tortured soul portrayed by Sunny Singh. Singh's character is shown drunk, stumbling around, and unkempt. Sonny really gets into the tormented mind of someone who has lost a child, as his own daughter was kidnapped in the past. Sunny's character fought in the past, but now has to be kind of forced to fight again this time not in a ring.

'Honorable Sins' is based off of a true story sadly, and unlike typical Hollywood or even Bollywood material, manages to feel almost like a sordid well planned out documentary, or a reenactment of actual events. The acting for all the cast is honest and forthright. Actress Asha Annais really shines as Evie. Evie is tormented at various points in the movie by potential captors yet always manages to stand her ground, no spoilers, of course! Asha handles her dialogue in 'Honorable Sins' well portraying partially scared, frustrated, and eventually angry.

Ronald F.T. Bettis portrays Adrian, one of the bad guys, and himself a conflicted soul, obviously he is manipulated as well. Giving away what happens in the final 20 minutes of the 100 minute movie is not my thing but the seemingly lugubrious pace is elevated to 100mph!

The scenery and cinematography in 'Honorable Sins' are beautiful, shot in Alberta, Canada, most likely partially during the Winter or Fall. The stark contrast of the environment conveys what would happen if a child was kidnapped in that remote land. Parts of the film are dark, yet during a capture scene it is obvious warranted, Suza and her crew make sure to light the actors' faces even if the background is devoid of light, all to create a mood.

Musically and dialogue wise, the film sounds great in headphones, people speak in relationship to their location on camera, a nice touch for an independent film. The music builds the suspense, layer upon layer, with a thumping drum beat near the end. 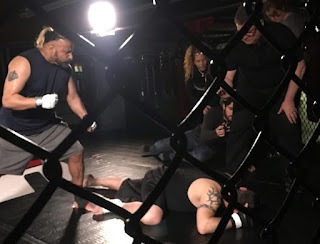 Above photo: Sunny Singh behind the action on 'Honorable Sins' (C( 2021 Infraction Media, all rights reserved image not monetized.

The Action in 'Honorable Sins' is not the main focal point, yet there are a few scenes expertly crafted by Sunny Singh who serves as the fight coordinator. I liked the fact they chose the realism rout not to beautifully frame and pose the combatants.

Overall, 'Honorable Sins' is very good, remember though this is a truly indie film, made with a small budget, a labor of love. When I review films that have a smaller budget I rate them against movies that have the close to the same monetary expenditures. 'Honorable Sins' is one of those stick with it and you will be rewarded films, watch it without distractions, and rates a solid 8 out of 10.

Honorable Sins is available now to rent now only $4.99 or buy $6.99 on www.infractionmedia.com

The film is starting to garner awards and much festival attention! Hopefully as theaters open up people will be able to attend more film festivals and support indie movies!

'Honorable Sins' movie based on human trafficking and true story. Thanks for your support.