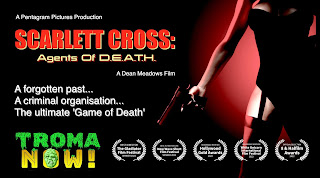 
Greetings valued Dan's Movie Report readers, FINALLY 'Scarlett Cross: Agents of D.E.A.T.H. Is on the cusp of releasing through 'Troma Now'!! Troma Now is a service available on the website and as apps in Apple, Amazon Prime, Google Play Store, and Roku. The service costs $4.99 per month with the first 30 days free. https://watch.troma.com/ is the main website and it can be watched anywhere  by the month or $50 dollars per year, saving 10 dollars after the first free month.

'Scarlett Cross' opens rather salaciously with a truly bizarre, literally titillating, yet oddly engaging fight sequence, not for the children. In fact this movie if rated would probably be an NC:17, lots of violence and copious opening nudity. Notwithstanding is the creativeness of Writer/Director Dean Meadows in combining a horror, action, and thriller film all in 90 minutes. Actually Scarlett Cross is broken down into four distinct parts yet by the end they merge together at some point.

Focusing on chapter 2, 'Asylum 13' which opens with actress Tayah Kansik as Joanna Smyth, the bodyguard! We see three men chasing one man in the Forrest and the action flails out from there. Kansik gets the intensity and acting down, along with extreme action. She has a sequence with a daytime Ninja, yeah they do exist haha! I liked that the choreography on her fight was clear and easy to see in broad daylight, and the moves were fluid and entertaining. More action and fights ensue when she takes the professor back to the safe house, again no spoilers!

Actress Kat Clatworthy as Jennifer Stone has a short but fun fight with actress Hannah Farmer as Sakura Nagasawa. Sword play and blood, what is not to like haha! Seriously though the indie movie moves along at a decent pace, never a dull moment.

The sheer variety of kills in 'Scarlett Cross' make it one for slasher fans as well. For example there is a particularly brutal scene with a nun in a church, no spoilers, but let us just say things are not as they seem. Other parts of the film have sword kills, gun kills and even some other surprises! Dean Williams as stunt coordinator worked with the actors to make the majority of the action seamless.

Dean Meadows in addition to writing and directing 'Scarlett Cross' pulls quadruple duty as Cinematographer and Editor for the film! Often a first feature length film sees the director handle multiple roles, here is hoping by dipping his feet in all aspects of 'Scarlett Cross', that Meadows' career will ascend to higher levels beyond 2022.

The technical aspects of the film are solid, some minor audio issues with regards to ADR, but overall a solid effort. The camera work by Kevin McDonagh captures the essence of action in 'Scarlett Cross'. The musical score is appropriate for the story and never obtrusive, always enhancing the action and laying the foundation for the drama, in 'Scarlett Cross'. Lighting on the film made it very easy to see the action as the subjects were well lit for their fight sequences. Given the tight budget, 'Scarlett Cross; was pretty entertaining.

Overall, this is an ultra low budget film, virtually made for a Troma type audience. Perhaps it means that regular action viewers or thriller viewers may find some of the subject matter a bit off-putting. For me however, I quite liked what Dean Meadows and his crew were going for here and rate 'Scarlett Cross: Agents of D.E.A.T.H. A solid 8 out of 10.

Watch for interviews with Dean Meadows and Actress Tayah Kansik later in 2022, on your home for exclusive content, Dan's Movie Report!