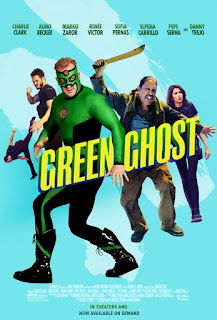 Greetings valued Dan's Movie Report readers. Across my desk today comes 'Green Ghost and the Masters of the Stone'. Thanks to Marko Zaror, I heard about this film. 'Green Ghost' as I will call it for the remainder of my review has a quite interesting plot: In a Texas border town, car salesman Charlie Clark, plays 'Charlie Clark'  and he moonlights as masked Lucha libre wrestler 'Green Ghost' When assailants arrive seeking an otherworldly emerald, Charlie discovers that he has super powers that he must harness to save humanity. (Source: IMDB)

In the wake of the copious amount of superhero movies and TV shows over the past few years 'Green Ghost' takes aim at the indie market and a humorous vibe. Make no mistake 'Green Ghost' is a low budget film, but has some quite entertaining action and humor. Danny Trejo plays a drunken master named 'Master Gin' hahaha! Nice to see a superhero film not taking itself seriously. Although much of the action and dialogue is lighthearted, the movie has copious amounts of action, fights and intrigue.

Marko plays a legendary master named Drake, constantly training and envisioning the power he possesses. He has a quest to squire the Emerald. On the light side is Charlie we see a training montage in which a Spanish Language cover of 'Eye of the Tiger' is played.

Marko's Drake character of course has some evil Hench people! The talented Arnold Chon, who serves as the film's stunt coordinator plays Kwan Tak. He is ultra fast and diabolical hell bent on serving Drake. Talented and stunning Michelle C. Lee plays Song Shijin, in addition to her cat like martial arts prowess she has supreme mental abilities, ahh just like in real life! Nice to see villains who have real skill not just dumb henchmen or women!

The amazing Danny Trejo. He has a fun quote “The power is like alcohol, 'drink it angry you fight' 'drink it happy, you make love' hah! Everything he is in has an instant watch fun factor, as he puts heart into his roles whatever the size and scope. Trejo's drunk character works well here, “Machete I don't need no stinkin Machete” he says about 2/3 into the movie!

Andy Cheng who is quite an accomplished stunt artist and fight coordinator, plays Master Hung, he has a great fight with Marko. Speaking of Marko, he also serves as the film's fight coordinator along with Arnold Chon. Make no mistake about 'Green Ghost' this is a top notch fighting flick.

Of course the quest turns into a massive multiple attacker fight near the end here, and it is spectacular. They do cut back and forth between the action of the three main fights but enough time is spent on each one to have the impact necessary to see and feel the action.

Literally the final 20 minutes of 'Green ghost' is one massive action fight sequence, including regular fighting and super powers. The fights are precise and the action is rapid and punches and kicks never seem to be weak. The action is well lit, and well filmed, no shaky camera, a few slow-motion scenes are for added dramatic effect, but never seems to get in the way of the action. My favorite fight outside of the massive final fight with three vs Marko's Drake character is the fight between Michelle Lee and Sophie Pernas hey the girls really get down and brutal!

Special effects and other behind the scenes aspects of 'Green Ghost' are on par with high quality indie films. Fun flick all the way around. Director Michael D. Olmos son of Edward James Olmos does an excellent job of wrangling the talented martial arts oriented cast, getting them acting and action focused.

Overall I really enjoyed 'Green Ghost', the film rates a strong 8 out of 10, quite entertaining way to spend 81 fast moving minutes! Well worth a rent or purchase to support indie film!