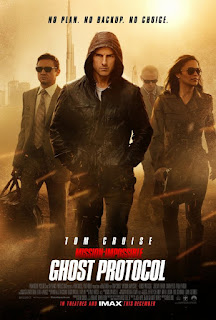 Just got back from the 9:01 Pm IMAX showing of Ghost Protocol. My ears are still ringing from the Batman trailer attached at the beginning. Be ready for a new more ominous villain, and some damn loud stunts and action.

Ghost Protocol is a thrill ride that rarely slows down, but the fact that this Mission has a true team effort makes the film thoroughly enjoyable to watch. After the pre-title sequence the film opens with Ethan Hunt (Cruise) in a Russian prison, with the aid of his cohorts he escapes, the very hard way out.


The team is formally introduced and includes Simon Pegg as Benji, Jeremy Renner as Brandt and a very ravishing excruciatingly lethal Paula Patton as Jane. We later find out the connection between team members, but as soon as the action shifts to Dubai, there is no time for pleasantries save for some wisecracks between the team members.

The stunts are jaw dropping in IMAX. The Burg tower is so tall it dwarfs the other structures around it makes for a fitting series of action sequences.

Paula Patton is fun to watch and she matched Mr. Cruise in intensity and intrepidity. Her fight training made it look like she could mix it up with the boys. Her sexiness also became a weapon, the dresses she wears covers several nice non-electronic pieces of equipment haha. 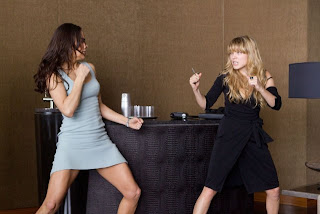 Why should they guys have all the fun! Photo by David James – © 2011 Paramount Pictures.

The film's final act takes place in India, more exotic locations, maniacal action, and a two million dollar prototype BMW. Quite often it was hard to catch my breath, but there was enough talking parts, and futuristic gadgets malfunctioning to keep the story moving even if the plot at times got lost in the action.

The cast all did a solid job with their characters, coming off as natural, not forced. The interplay between the team, the humor, and intensity kept the film flowing. It was nice to see Michael Nyqvist as Hendricks. He is a fantastic actor, and deserves roles in big budget films.

The IMAX production was interesting in that only portions of the film were filmed in the IMAX format, the screen altered in size when IMAX was being used and back to standard size when not. This was very subtle, and did not detract from the continuity and presentation of Ghost Protocol.

Overall I liked it. I think the IMAX format suits an action movie of this magnitude and am glad they chose NOT to do it in 3D. I rate Mission Impossible: Ghost Protocol an 8 out of 10. I recommend this in a theater. The film opens December 21st, but is already playing at selected IMAX theaters.
Posted by Dan's Movie Report-Danny Templegod at 12:59:00 AM