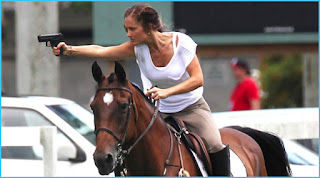 Pic. Minka Kelly will not chase you on foot! be prepared to face her wrath! damn makes me want to do somthin' wrong in Miami! (Location: Miami Stables) (Photo Credit: caughtonset.com)


A a native Floridian I am tickled pink, also black and blue from the news that the new Charlie's Angels Will debut Thursday September 22nd at 8pm est on ABC. The cast is smokin' hot and includes vivacious and salacious Minka Kelly as bad ass street racer Eve French and ever lovely Dina Meyer in a non angelic role. Full cast and crew can be found @ http://www.imdb.com/title/tt1760943/

As an interesting side note The Miami Herald reports that ABC has rented out an abandoned Wynwood Warehouses for the interiors confirming the fact that the entire show will be filmed in South Florida! No I did not go to the audition to be an Angel, leave that to the female professionals!

Drew Barrymore's Flower Films is involved in the production.

This is girl power all the way! Hopefully the show will be a hit, as the prospect of Dina Meyer and Minka Kelly in Florida for any length of time will surely heat up the beaches! Lock it in to Dan's Movie Report for future updates!
Posted by Dan's Movie Report-Danny Templegod at 7:33:00 PM