This is a fantastic opportunity for new and even established film makers to display their movies for a wider audience. Tribeca was formed in 2001 by Robert DeNiro, Jane Rosenthal, and Craig Hatkoff.

Deadlines to submit U.S. and International films for the 2012 Tribeca Film Festival are as follows:

Deadlines for filmmakers to submit for the 2012 Tribeca Film Institute programs are:

Starting September 19, 2011, submission forms and complete information regarding eligibility for the 2012 Tribeca Film Festival will be available at www.tribecafilm.com/festival. Questions

regarding submissions may be directed to entries@tribecafilmfestival.org or by calling 212.941.2305.

In other Tribeca news, they have acquired "SHUT UP LITTLE MAN!" An Audio Misadventure. The film is available August 25th on VOD. This fun film has the following hilarious and crazy, slice of the 80s plot description after the photo: 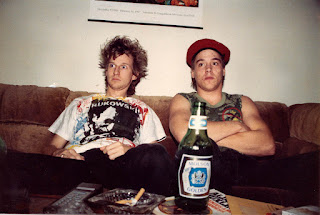 In 1987, Eddie Lee Sausage and Mitch Deprey, two young punks from the Midwest, moved into a low-rent tenement apartment in the Lower Haight district of San Francisco. Through paper-thin walls, they were informally introduced to their middle-aged alcoholic neighbors, the most unlikely of roommates—Raymond Huffman, a raging homophobe, and Peter Haskett, a flamboyant gay man. Night after night, the boys were treated to a seemingly endless stream of vodka-fueled altercations between the two and for 18 months, they hung a microphone from their kitchen window to chronicle the bizarre and violent relationship between their insane neighbors. Oftentimes nonsensical and always vitriolic, the diatribes of Peter and Ray were an audio goldmine just begging to be recorded and passed around on the underground tape market. Their tapes went on to inspire a cult following, spawning sell-out CD’s, comic artworks by Dan Clowes (Ghostworld), stage-plays, music from the likes of Devo and a Hollywood feeding frenzy.

As a young adult in the 80s I can't wait for this one! check out the you tube trailer at http://www.youtube.com/watch?v=HZv5BlVjZGY

For additional information point your browsers to: http://shutuplittlemanfilm.com

Look for a future movie review on Dan's Movie Report!