Halloween theme movie news, be prepared to be scared!

Greetings to fans of horror films worldwide. This Halloween it is time to take a trip around the world to visit my recommendations for your Halloween viewing pleasure.

First up comes New Zealand nightmare called Wound. I actually reviewed the film two months ago, finally now someone actually had the balls to put out one of my hot indie pics of the year as of 10-20-11! This is a Cine Du Monde release! They are a new company with a propensity for intensity with regards to films. Left of center is right up my ally. Check their official site @ http://cinedumonde.co.uk/

Sever your browsers over to

From the UK and the fine folks @ MPH Films comes The Hike, a nightmare of a camping trip! Fresh off the world premiere in London, lead actress Zara Phythian states "Finally home, was really delighted with the audience response to the hike, and they kind words from the films fans." She had to cut the after-party short due to illness, best wishes for a speedy recovery!

Straight from Hollyweird and Cinema Epoch in the USA comes Kantz's post apocalyptic madness called Wasteland! My copy is on the way, look for detailed review soon! Wal-mart still has it for $13.00! http://www.walmart.com/ip/17479950

Finally, from Massachusetts, in the USA comes a psychotic masterpiece in the woods called The Woman. This is a disturbing look at the last of a species of feral humans captured by a human family. She is mistreated, but has an ferocious way of survival. This is not a werewolf pic, but an excellent tale of violence,sadness and pain. The highlight of the film is the savagery that actress Pollyanna McIntosh plays "the woman" She is a commanding presence onscreen with virtually no dialogue. Check out her official website @ www.pollyannamcintosh.com 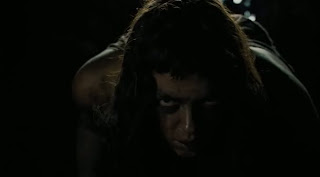 Above Screen capture from The Woman!