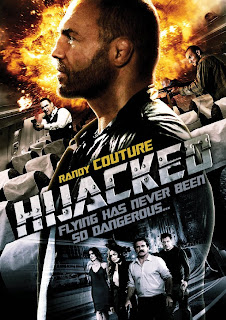 My friends know I am a huge MMA fan so of course I have to review Hijacked, the latest effort of Randy Couture. This one of those films that will surprise the audience, Hijacked has that Die Hard feel, full of action yet enough tense story line to keep things interesting.

Hijacked opens at a lavish Paris party thrown by one of the richest CEO's in the world, Bruce Lieb (Craig Fairbass). Lieb is trying to save face as he is being investigated by the SEC for shady business practices.

The story unfolds when Paul Ross (Couture)is asked by Lieb to come aboard his private plane for protection, with a side story of Paul's ex- fiance' Olivia (Tiffany Dupont) on board as well as Lieb's press/publicity agent.

The villains in Hijacked are scowl faced bad guys lead by Rostow Pawlak (Holt McCallary). They intend to take the entire fortune of Lieb Industries and parachute off the plane with the cash secured in a Swiss bank account.

Hijacked is full of violence, gun play, and fights, but there is enough time in between the action to properly tell the story and develop some of the characters. Hijacked is a hard R rated film as there is a lurid sex scene that has a not so nice climax.

The acting in Hijacked is decent, Couture is about as low key and unflappable  as they come in action heroes. I am not sure if his emotion would have made a difference, he was supposed to be playing a special-ops trained CIA agent. Tiffany shows enough emotion for every cast member in Hijacked as she clearly relished her role, and enjoyed being sexy and smart at the same time.

The 90 minute film flows at a lightning pace, never a wasted moment. Some of the minor characters look a bit lost, but this does not detract from Hijacked's main story or focus.

Another thing I like is that Hijacked has several dynamic female characters, even a sultry, yet consistently angry female villain, played by Lynn Moore. I wish more action films would allow the women to have a bit of interplay, and not always portray the scared victims.

Technically the film looks and sounds sharp, polished, and slick. There is much gunfire, scuffling, and running around in Hijacked. The foley artists must have worked overtime on Hijacked.

This is a good film, definitely worth a rent or purchase for the tense action, and rates a 7 out of 10. Buy the film directly from the Amazon Link Below: