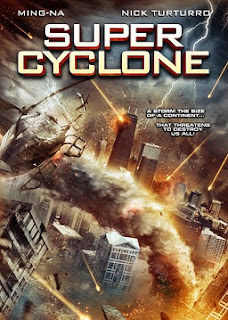 
As a writer and lover of under-ground, sometimes bad, campy movies, I can never understand why people rent movies from The Asylum and then bother to write about them trashing the fact that they are low quality, with bad acting etc. With miniscule budgets of around $200,000 or so, and two week shooting schedules, The Asylum manages to come up with a few amusing projects, don't expect high art, and disappointment will be minimized.

Another off-shoot of The Asylum is they provide an outlet for either upcoming actors or actresses, or ones who have done projects in the past to have an outlet to re-hone their skills. An example of upcoming person is actress Aurelia Scheppers who is in 11/11/11.

By upping the quality a bit on the CGI the Asylum have managed to create a new niche for themselves in disaster films in 2012. Is this studio quality, the answer is a definite no, but, Super Cyclone is translatable to TV, thus a natural market for SYFY channel type stuff.

A short film description of Super Cyclone not to "spoil" anything: Dr. Sparks warns everyone of the oncoming situation even though they are powerless to stop it. An outlying oil rig provides one of backdrops to the action and headstrong military are brought in to attempt to control the situation. Some odd science ensues, including releasing a massive amount of nitrogen to super-cool the storm to sap it of energy. Apparently this storm was man-made, when an oil rig drilled too deep, let that be a lesson to all men out there never, drill to deep, haha! Man-made efforts to stop the man-made storm. Everyone tries frantically to escape, in typical disaster style. Explosions, high waves and winds ensue, I am assuming my readers get the picture. 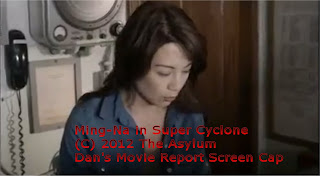 
Ming-Na is enjoyable  to watch, even in this Asylum effort. She has an expressive face, natural beauty and a strong speaking voice. Even though she has made her mark on TV in shows like Stargate SGU and E.R.,  Ming-Na has not starred in many feature films since playing Chun-Li in the ill conceived 1993 Street Fighter film.

As for the acting on Super Cyclone, not the worst Asylum has to offer, but I kind of wish there were more realistic emotions from most of the characters involved. Not just upon eminent doom type shots, but throughout the film, sometimes characters had just a blank stare kind of look, also at other times they were overacting, almost screaming their lines. The short shooting schedule on The Asylum films often don't allow for many re-shoots, Super Cyclone looks like a plethora of one-take shots.

Overall, I say Super Cyclone is worth a rent, yeah a bit ridiculous, but fun. The CGI and action make for a somewhat decent movie night rental, I rate the film a 5 out of 10. The first link below is for the Amazon instant video:

Link to purchase the film: (Some sources have it for as little as 8 dollars)