Killing Them Softly, A Morality Play Wrapped in a Gangster Movie! 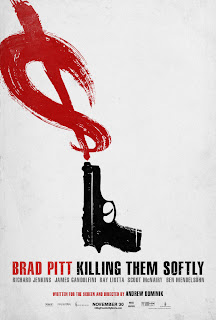 Above Pic: Killing them Softly Poster

Later this month, Killing them Softly will hit theaters. Brad Pitt stars as Jackie Cogan, a hitman that has a preference of killing his targets at a distance. He doesn't like how they beg for their lives and prefers to kill them softly in order to avoid the moaning.

The main plot of the film centers around a mob run poker game. Three would be criminals decide that it is a good idea to rob the mob game and the local mob economy is threatened. Pitt is the hit-man that they hire in order to take out the guys and restore order. 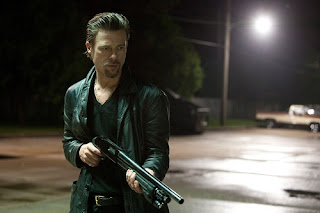 Above Pic: Brad Pitt in Killing Them Softly

However, the theme of the movie seems to be more politically charged. Unlike films such as the poker movie 21, this one is less about guys trying to make their name in the world and more about the criminality underlying the US financial crisis.

Pitt says, "that the movie is very much a movie that emphasizes the divide between rich and poor in American society." The mob is clearly representing American big business with the robbers as poorer Americans that need to be kept down. One main quote that has been highlighted during preview is that "America is not a country, it's a business."

Some have tried to pass off Killing Them Softly as a poker movie based on the fact that the crooks stole money from a poker game. The fact is that the movie not like poker classics like Rounders or Kaleidoscope. Instead, it is a crime action drama that is trying to act as a morality play for the American public.

It would seem that the film is trying to portray the American big business and government as having the same impact as the mob did on cities like Chicago, New York, and Las Vegas. Whether or not that impact translates to those that watch the movie remains to be seen.

What many fans can expect from the movie is a couple hours or dark humor as well as action that you would expect from most gangster movies. At present, the film is being highly anticipated by fans of both Pitt and the gangster genre and soon we will see whether Pitt made another great film choice or should go back to movies that entertain rather than educate. Killing them Softly hits theaters on November 30th.
Posted by Dan's Movie Report-Danny Templegod at 9:28:00 AM