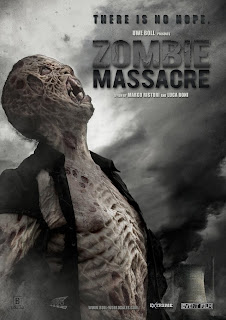 Above Pic: Poster for Zombie Massacre


Yeah, Yeah, Yeah all sheep do not read this! Hate me, hahaha, make some lame anonymous comments. The master of low budget madness is back again with his zombie nightmare, Zombie Massacre! Love him or hate him, Uwe manages to get funding for his projects, that are tinged with unique humor, and over the top maniacal characters. Check out his cool web portal where all of his films are featured http://www.boll-worldsales.com/

For Zombie Massacre, Uwe turns to Luca Boni and Marco Ristori to write and direct, very loosely based on the video game.

SO, again I ramble, fiery red haired Tara Cadinal as Eden Shizuka, will be you sword slicer and all around violent girl for this flick, and Uwe will play The President. HAHA

For more research wade through the youtube madness and go to
http://www.youtube.com/watch?v=E52sMpCZbnk

Watch for more on Tara in 2013 with my special feature year on independent film makers. Watch for her film, Legend of the Red Reaper soon! For the trailer check out this site @ http://www.boll-worldsales.com/ALL-MOVIES1.html