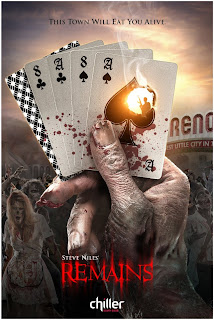 
With the popularity of The Walking Dead TV Show, Zombie mania is at its highest ever. The age old debate rages, fast or lumbering zombies. Remains paints a dystopic, myopic De-evolutionary tale of the events following the Zombification of Reno, Nevada. Steve Niles, who penned the diverse 30 Days of Night, paints a sordid picture of the society, a microcosm of the world.

REMAINS opens with a bang literally as a new non-nuclear age is welcomed in with a mountain top test explosion. While the blast is never fully explained, watching the film, it is evidence of some sort of exposure, because the more a person is outside the faster exposure occurs. 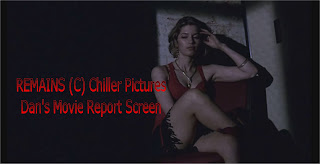 Above Pic: Sultry Evalina Marie (Tori) waits to get out. (C) Chiller (Click to increase to wallpaper size!)


The main setting in "REMAINS" is inside a small casino, where our "heroes" are holed up while a plan is devised. The lucky few who survived the initial blast were isolated. In fact the main two characters Tom (Grant Bowler) and Tori (Evalina Marie) were actually locked downstairs on purpose while she um paid of a supply side debt if you get my drift.

The hotel is obviously well stocked, so the group, which includes two other people wrestle with the idea to stay or leave. In REMAINS the infected seem to "learn" different movements and are "turned off" when their is lack of light or activity. Unfortunately this is never fully explained, as no proof of mind control is given throughout.

REMAINS is full of action and jump scenes when it needs to be, and moments of mildly tepid terseness at, allowing for the viewer to make his or her own judgement. If the beginning back story had been explained, the disconnect would be lessened, thus making for a slightly more enjoyable film. The script should  bit more imaginative for the tale, but REMAINS is more of a visual story. 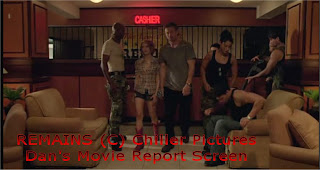 Above Pic: The militia group meet with our protagonists (C) Chiller


However, with a budget of 750K, REMAINS is an entertaining zombie romp, full of attitudes and egos just as demented and dangerous as the zombies. A military convoy soon sees the group's smoke signals, and REMAINS flails out from there.

The acting in REMAINS is decent, the script unfortunately did not lend itself to stand out performances. I enjoy Tawny Cypress's portrayal of Cindy, she is part of the military convoy. She has a fire behind her eyes and seems to invoke a sense of urgency. Evalena Marie as Tori is a firecracker, she has an attitude, a myraid of weapons she finds along the, and not afraid to use them, Resident Evil Tribute? Did I mention that she is great therapy for the retina, cornea, and optic nerve haha.

Yeah it is not perfect, incongruities abound, but REMAINS is a fun way to spend 88 minutes Remains rates a 6.5 out of 10 worth a rent. Actually Amazon has it at a rather reasonable price, check link below.