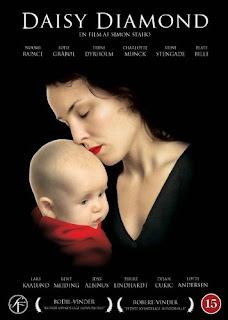 Daisy Diamond is a sombre, sordid, and ultra depressing story of a young woman raped by her boyfriend and then forced to live a life of a single mother named Anna portrayed by Noomi Rapace, with a constantly crying baby named Daisy. She has lofty dreams, goals, that are hopelessly hampered, by her baby getting in the way.

Anna is thwarted at every turn by the many casting agents and directors turning her down, even going so far as to insult her. Daisy Diamond falls in the epic tragedy category, so mind-blowing and confounding, disturbing, dastardly, and excruciatingly beautiful to watch. Even with the loquacious monologues by Noomi's character, Daisy Diamond manages to unfold into movie that dares and forces the viewer not to look away. No subject is taboo in Daisy Diamond.

Noomi gives a inimitable performance, worthy of an academy award, except the subject matter is so bruising, that I am sure no member of the academy would ever watch, or if they did would be scared to admit it. Noomi is in every scene bearing her body and soul in more ways than one in Daisy Diamond. This is perhaps the finest performance of any actress in the last decade, sadly, few will ever see it.

Noomi states, that Daisy Diamond is her favorite film to act in, as it was so challenging. This is not Prometheus, nor The Girl With The Dragon Tattoo. I warn ALL potential viewers of Daisy Diamond, it will offend and shock you. Noomi's character is raw emotion, pent up sexual tension, rage, undying love, and sadness rolled into a rather disheveled, five foot three inch package. Daisy Diamond is highly original, and deserves a wide release in the US, but sadly due to the subject matter it will never arrive.

Still reading my review? I recommend to all potential viewers to watch a film such as In My Skin, Baise Moi, or Irreversible BEFORE watching this. If these films bother you or offend, don't even bother, cause Daisy Diamond is worse. If you have small children or are one of those parents, cooing all the time about your cute kids, I will be honest, don't watch, you will hate Daisy Diamond, and probably want to beat up Noomi.

I am very used to watching European films, and for me Daisy Diamond is an undulating masterpiece, a crowning achievement in film, simplistic in approach, yet seething with energy. Daisy Diamond rates a 10 out of 10, a perfect score, because the film accomplished exactly what it set out to do, disturb the viewer, not just with shocking individual scenes, but with a concise, all be a very dysmorphic story.

Amazon has the DVD as a Region 2 disc