Have you ever wanted a second chance?  Give someone a gift you were not able to give?  Tell them you loved them one last time?  These are the questions at the heart of Displacement, our indie film passion project that we're really excited about sharing with you which explores themes of love and loss, the power of forgiveness, and the consequences of turning back the clock.

All of this within the context of a mind-bending thriller that follows the story of a young physics student Cassie Sinclair (Courtney Hope), who must solve the murder of her boyfriend while battling memory loss and timeslips caused by a Quantum Entanglement Event.
Told in the tone of Memento meets Primer, with a dash of Fringe thrown in for fun, Displacement is ultimately a story about letting go of the past.  Of guilt, of grief, of all that stuff that holds us back and beats us down. It’s about making oneself whole. Using the metaphor of quantum physics and particle pairs to tell that story. 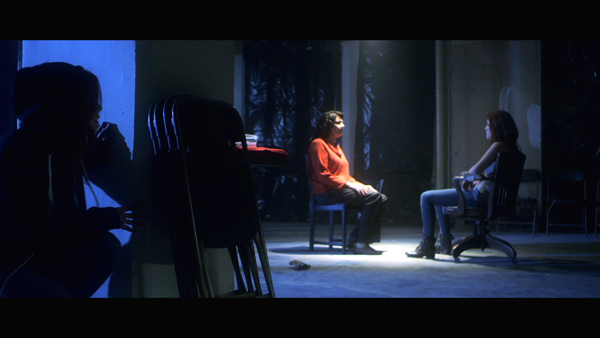 By now you've all heard the stories of how difficult it can be to get a film made in Hollywood, especially a passion project like this one.  Even if you're lucky enough to find a 'deal', with endless rewrites for the sake of rewriting (not to improve the story of course, merely to cover the studio's backside), multiple producers on projects, and foreign "queue scores" determining your cast, it's amazing anything gets made at all in this town, let alone anything of quality.
True story: I have a screenplay I've been trying to get set up for years now.  It has won awards.  It's a modest budget by studio standards.  I even have an Academy Award winning actor attached to play the lead role.  And yet, unless I'm willing to step away from directing it, or make major changes to the script that would frankly ruin it, I've been unable to get it made.
So I decided to go back to the drawing board and design a script that could be produced on a low budget yet at a very high quality, with a compelling story and characters that would attract solid, reputable, talented actors.  Something I could go to my crew members with and cut deals based solely on their desire to be involved in something good, that had creative integrity and enormous potential.  I began writing it 4 years ago.  That screenplay became DISPLACEMENT.
My desire with this story is to explore the human condition, utilizing real science and real experience blended with fiction to illustrate that we can in fact alter our destinies, even in small ways, simply by being present in the moment and looking towards the future, rather than the past and allowing it to consume us. It is a lesson I have to keep revisiting to this day. Something I imagine all of you have experienced to one degree or another as well. Perhaps together through the shared experience of this finished film we can all experience a sense of healing and release from some of those emotional shackles. A collective “letting go” of what binds us, as experienced through the journey of our character Cassie. All the while enjoying what I endeavor to be an entertaining and emotionally engaging 90-minute moving picture.

DISPLACEMENT is a character-driven thriller inspired by the loss of filmmaker Kenneth Mader's mother to cancer and the inability to grant her final wish.

Besides being a cool quantum time thriller with an engaging, character-driven story, this film has deeper meaning: My mom was my biggest fan and greatest supporter. She talked my father into letting me build movie sets in their garage back in Chicago.  Cooked food for the crew.  Came to every screening of every one of my films.  And moved her and my dad out to Los Angeles after me so we could be close as a family.
Four years ago my mom passed away from cancer, which came on so suddenly there wasn’t time to grant her final wish: to see the ocean one last time.  That life experience inspired me to write this script, and the ensuing emotions now reside at the core of this film, essentially the heart of the picture driving our character Cassie forward. My dream is to fulfill my Mom's last wish as best I can by making this film. 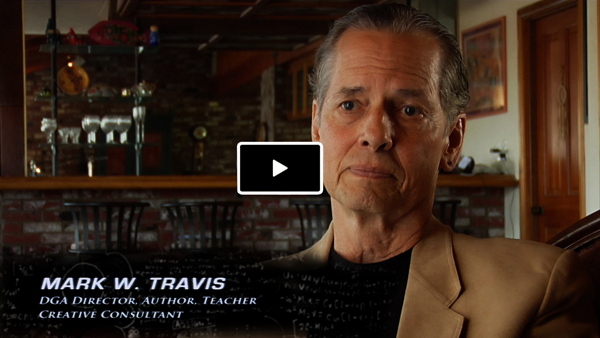 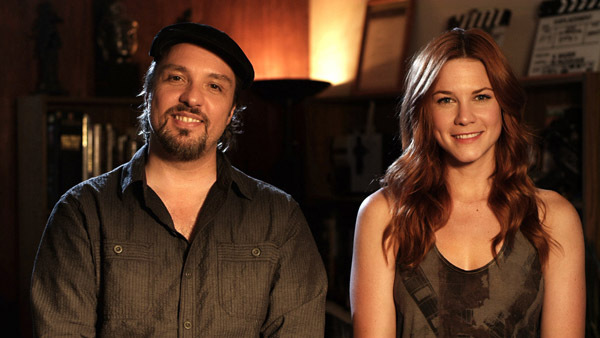 Writer-Producer-Director and Star/Co-Producer
KENNETH MADER is a multi-award-winning filmmaker whose very first feature film was distributed by 20th Century Fox and premiered on the SyFy Channel.  His next film Passing Darkness won numerous awards and helped solidify his career in Hollywood. He’s since produced and directed dozens of independent projects, was recently nominated into the NBC Universal Directing Fellowship, has worked with and shadowed directors on television shows like Criminal Minds, Star Trek: Enterprise and Voyager along with studio feature films. He’s trained with DGA directors Mark W. Travis, Ed Bernero, John Gallagher, Mark Rosman, Roxann Dawson and many others, and will be joining the prestigious Director’s Guild of America himself later this year.
COURTNEY HOPE http://www.courtney-hope.com/ is a rising star in Hollywood, having played lead roles in films like Mob Rules and Prowl from After Dark Films/Lionsgate, and recently starred in the film Swelter alongside Lenny James, Josh Henderson, Grant Bowler, Alfred Molina and Jean-Claude Van Damme. She’s also guest-starred on the shows NCIS: Los Angeles, Criminal Minds, CSI: Miami and recently starred in the popular Somebody Picked the Wrong Girl commercial that went viral with over a million hits on YouTube!


Click here to see another clip from Mark W. Travis talking about Ken Mader and Displacement 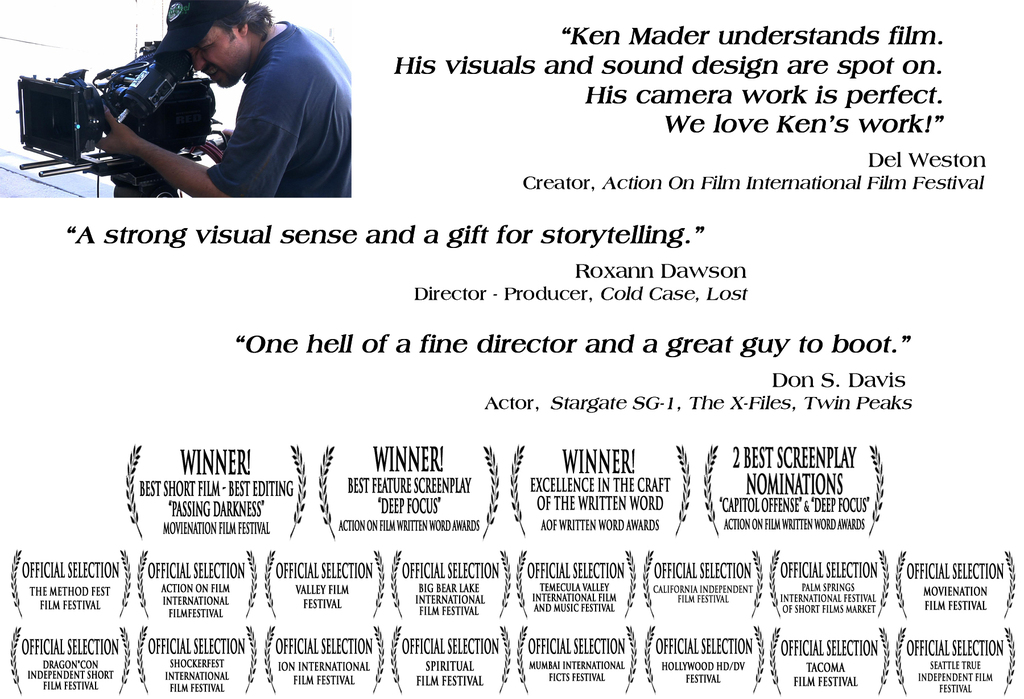 In addition to our extremely talented star COURTNEY HOPE, who plays our lead character Cassie Sinclair, an emotionally tortured young woman on a journey to discover the truth and change the past at any cost, the film also features legendary actress SARAH DOUGLAS (Superman I & II, Conan the Destroyer, Green Lantern: The Animated Series) who plays Dr. Miles, an enigmatic figure at the head of the Quantum Initiative Group, a mysterious organization funded in part by the U.S. Defense Dept. that deals with Einstein's Unified Field Theory, Quantum Entanglement and Time Displacement.  Dr. Miles is seeking to extract information from Cassie that could correct the anomaly and save their lives... or perhaps she has more sinister intentions.
CHRISTOPHER BACKUS (Elevator, 3 Days Gone, Amongst Friends) plays the murdered boyfriend who may or may not be secretly involved in this mind-bending plot.  And we have the script out to more great actors for the remaining roles, with other big casting announcements coming soon.


Mark W. Travis again talks about the cast. This clip includes a sneak peek at a scene of Courtney and Sarah in action!  Enjoy!

Quantum Physics Story Consultant
Emmy-Nominated Editing Advisor
A member of the Editors Guild for over 15 years and a graduate of the USC Film Production program, David Abramson has edited and assistant-edited features, movies of the week, and miniseries for Columbia/SONY, Disney, Paramount/DreamWorks, NBC, Warner Bros., Universal, Lionsgate, MTV and numerous independent production companies. Projects have ranged from features grossing $250 million worldwide to small independent features and television movies, including portions of Michael Jackson’s This Is It for Columbia, a UK-broadcast concert special starring Matthew Morrison (Glee), 70 minutes of all-new documentary material for the Blu-ray release of the Oscar-nominated classic Das Boot, and the festival-winning feature film The Indian, available on DVD, starring Matt Dallas of the hit ABC Family series Kyle XY.

He cut three series pilots for Disney, The Replacements for executive producer Jack Thomas (Fairly Odd Parents) which was immediately picked up to series and began airing in 2006. Perhaps most notably, in 2001 Mr. Abramson edited significant portions of feature-length Episode 3 of Steven Spielberg's ten-part miniseries Taken. That episode was nominated for an Emmy for Best Editing.
David is also a talented writer-director and brilliant quantum physics major who's been helping hone the science aspects of the Displacement script.

Mark W. Travis is The Director's Director.  He is regarded by Hollywood’s top brass and international film professionals as the world’s leading authority on the art and craft of film directing.  All of his techniques stem from the pursuit of organic authentic performances that are deeply felt by audiences.  He is currently on the faculty of HFF (Munich), HSU (Kiev) and has taught at AFI, UCLA, The Binger Institute (Amsterdam), PU (Pixar University), FAS Screen Training Ireland and many other internationally acclaimed institutions and film schools.  He has served as directorial and creative consultant to Mark Rydell, George Tillman, Cyrus Nowrasteh, and dozens of Independent filmmakers in Hollywood and internationally.  He is respected and recommended by top actors such as Beau Bridges, Henry Winkler and Bill Pullman.
Productions directed by Mr. Travis have garnered a total of 30 awards including:  an Emmy, Drama-Logue, L.A. Weekly, Drama Critics’ Circle, A.D.A and Ovation awards.  His film and television directing credits are equally impressive, including The Facts of Life, Family Ties, Capitol, Hillers, the Emmy Award-winning PBS dramatic special Blind Tom: The Thomas Bethune Story, Going Under for Warner Bros. starring Bill Pullman and Ned Beatty, the documentary Earlet and The Baritones.  On stage over the past 20 years, Mark has directed over 60 theatre productions in Los Angeles and New York.

Yes, we have this covered too. 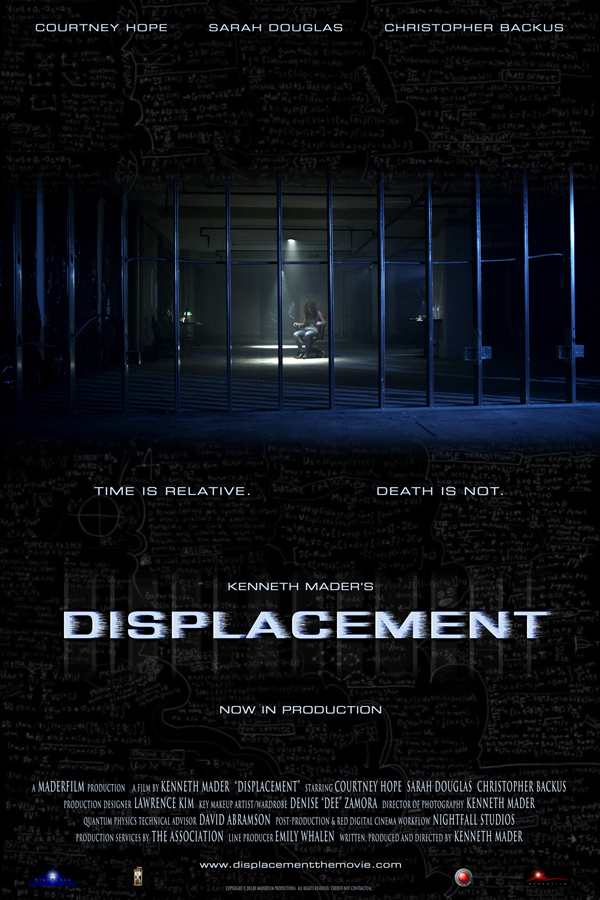