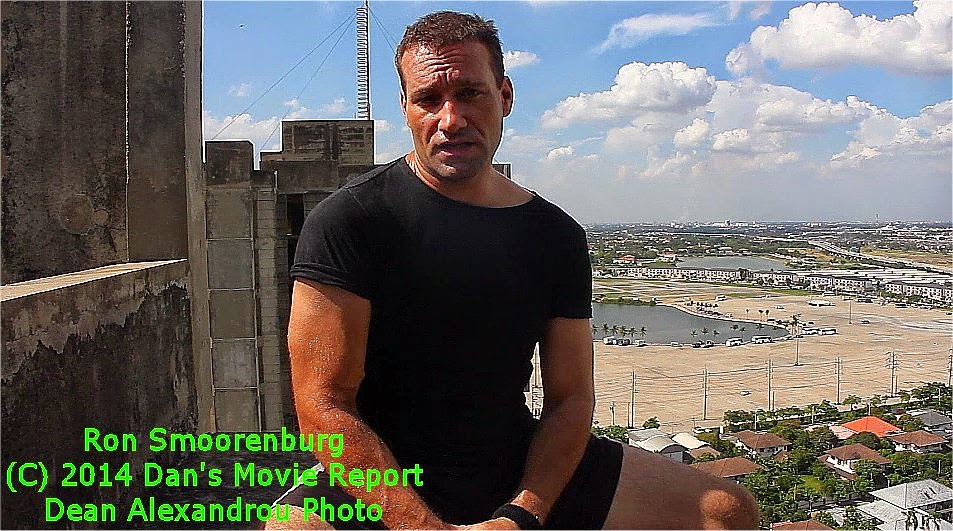 Bursting on the action film scene with a role in Jackie Chan's Who Am I, Ron Smoorenburg has carved his path to success with years of hard work and dozens of full force action films, including the 2015 Tekken film. Ron chats exclusively with Dan's Movie Report, directly from the Thailand set of his upcoming film Reflex. 3-2-1- GO, another exclusive interview!

First of all Danny nice to do an interview with you. If I have to describe a preparation day for Reflex. I always meet with Dean quite early, and we talk about what we love to do, what kind of fight moves we love to do. We study a lot of fight scenes as well and we make our own variations for the scene we are shooting. We put our own moves in. We try to work it out, if things don't work out we do it again. It has to flow, and be powerful, fast, there needs to be fire in there. We just keep going until it is perfect, and I can tell from Dean he is a perfectionist. We won't do the action if it is not good.

Describe working with Dean and Daniel, and do you have a favorite scene in Reflex.

If I have to describe an amazing scene or experience working with Dean and Daniel I would have to say it is all of the movie. In Reflex all of the team on Reflex were selected and they are people with passion. Comparing it to art, all of the people who create, do it for the art. Dean and Daniel are very very good at optimizing the people they have in there films, so they will make you look as good as you can, and people feel that. When they work for Daniel and Dean they go for it, what happens in Reflex is really some amazing moments, some magic moments, some people call the money shots, which came out of nowhere. The script and fights are already good, but even on top of that we had some moments like wow, we did not expect that, because everybody goes for it. That is a skill, and what needs to be created, and Dean and Daniel have that.

Chat about working with Selina Lo on Reflex, and your thoughts on action women in films.

Selina is perfect to work with. If you use women in a movie, of course they need to be skillful like Selina. They have to be quite tough as well. You have to make sure it is belivable. That is what we do in Reflex.

Shifting to the filming location in Reflex, talk about working in Thailand and compare it to working in Europe.

In Thailand, the local teams work super, super hard. I almost compare it to people from the pit stop (in a car race.) If I have a project in Europe it feels slow, the way they set up things, do each scene, etc.. Here in Thailand, even with the heat, it is very hot in Thailand, they are very, very fast, and work very hard. That is what makes Thailand interesting. For the film budget, you not only get nice locations, and cheaper labor compared to Europe, of course, but they also work faster. It is not 50 percent better, it is 75 percent better. Thai people are not the type to complain quickly, they just go for it and you don't have so many issues. You can set up your stuff, you work good, good working ethics, and discipline, very important. I love Thailand, really, this is the place to film, and they have the experience with Hollywood movies being filmed here also.

Compare working with actors on a fight scene as opposed to trained fighters.

Good question to compare those who have actual fighting experience, and actors who don't have that experience. Movie fighting is action and reaction. If the reaction part is missing, or the action part is not good, then you only have half of the product. If the actor cannot react right, even though you make a nice punch, then you don't look powerful. We make the actor look good, by giving good reactions. The actor himself cannot make you *the trained fighter) look that good. In addition you have to be careful with the actor as well. Very good stuntmen can go full *swings hand in punching motion) if he does not duck, he can still adjust. Mostly is is a kind of compromise. I recommend to train with the actors weeks before the shoot, and do workshops. In the long run this will save the production money, these are the things I recommend.

Chat about your involvement in Tekken 2.

Of course the movie is not released yet, so I cannot give to many details about Tekken 2. I can tell you that the fight scenes will be very sharp, good action good matches. I have some inside news already that the fight scenes turned out great. That is an example of a project that was very well prepared, good workshops. Amazing people on that film, and I really look forward to Tekken 2.

Chat about working with Jackie Chan on Who Am I, and how it has shaped your career path since the film.

Jackie Chan's Who Am I was my first movie and, was actually very tough, but I think I needed that, it showed reality. The movie business is not an easy business, and that is why not many people are in there. It was tough, but every movie after Who Am I was relatively easy. What I learned from Who Am I, is that I have to plan my career very carefully. I wanted to build up my career step by step. I want to build a good foundation, do many action movies, get the experience. They told me, literally, if you have more experience, you can make it very big. I took the time to do that. Between stunts and acting, I have about 70 credits now. I have worked with Scott Adkins, Tony Jaa, Van Damme etc... Sometimes I get beaten up, sometimes I have a nice fight scene as well, that is what I needed. Now I think I have this package together. I believe that is why in Reflex I had a bigger part, bigger fight scenes, but this comes after that period. I do not only love the end goal, but the way and path to the goal, it is fantastic, and I enjoy it everyday.

Wrapping up Ron, do you have a favorite moment in your film career.

It may sound strange, but it is when I think about my training. I like being on film sets, but when I think about epic stuff I am thinking of the moment I was training to get to that point, the path. I was thinking of kicking leaves in the street, putting on “Eye Of The Tiger' and doing section kicks, with the dream to do those things as a young man. I felt so strongly connected to that dream and reality, that I believe in it for real and live it. Now that I am actually doing it, I think back to when I was young doing the splits, kicks and that kind of bridges the dream to today's reality, that is why I try to motivate others. Life is quite precious, I look at my son and his life power, and try to motivate others, because I feel very sad to see talent wasted.


Thank you Ron for taking the time out of your busy schedule to chat about Reflex and other tidbits of info. Watch for more on Ron later in 2014 on your number one independent home for exclusives on the internet, Dan's Movie Report!