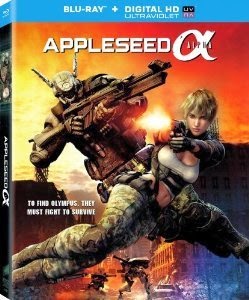 Hard to believe it has been over 20 yrs since the amazing Ghost In The Shell was created, The ground breaking animation coupled with the amazing story forever changed the face of Japanese animated features.

Appleseed Alpha is a ground breaking step in computer graphics, actually feeling like high quality video game, with the viewer right in the middle of the action. From the talented team of  Director: Shinji Aramaki and Writers:Marianne Krawczyk (screenplay), Masamune Shirow (original story)  comes the latest blast in the Appleseed story, 2014 style!

The CGI is impressive in the way it is seemlessly melded into the background setting. Actually from the look of it, hard to tell, a photo of a background might have been used, and then the characters added in as an extra layer. Obviously this is not a 300 million dollar Avatar, but what they animators came up with adds to the impact of the story.

Appleseed Alpha is a continuing saga style story, of a young female soldier Deunan Knute and her android partner Briareos Hecatonchires. They are surviving in a post World War 3 N.Y.C. The film opens with a bang literally, as the two of them our on a runaway subway train sabotaged, apparently by a third party that does not want them to complete there mission to deliver an antidote to their boss Two Horns.

Two Horns is a two ton cyborg, he is tough as nails and turns up like a bad penny even after you think he is a goner. Ha, To add to the complications a third faction, which I will not spoil to much involves the pair finding a surviving driod and a young girl later in the film. The four have to team up and find out the truth, and learn the way to take out a superweapon.

Overall I liked the film, thought that the plot was pretty solid for an 83 minute film, Not as complex as Ghost In The Shell, but geared perhaps for a younger, and this broader audience. Appleseed Alpha, moves along at a good pace, never straying from the plot. The idea that there are three distinct groups, the four of them, Two Horn's group and another darker sinister group after both of them, gives the film depth, not a simple black or white issue.

Minor quips are slight variation in the detail as the animated scenes shift to the night, the rendering seemed a bit to lack the depth and detail of day time, but not distracting. Example is the subway scene in the beginning. So much effort was spent rendering the characters that the ancillary background at times in the subway car and outside becomes an afterthought and a bit washed out. Secondly, perhaps a bit of a longer back story on the young girl rather than a flashback sequence, would make her character stand out more, especially as she is featured prominently at the end of the film. Those issues aside, plus other even more minor ones, are the only real problems with Appleseed Alpha

Ratings wise, Appleseed Alpha is very good, a must own for anime fans, even if the plot is not your cup of tea, the animation is so amazing for the most part, that it is a piece to be treasured. The action, artwork, voice acting, especially Two Horns, are very solid, and convincing. Yes it is English, but no matter, the film rocked and it has been awhile since this reviewer has viewed this quality of material. I rate Appleseed Alpha an 8 out of 10.

Film is available for Pre-Order on Amazon @