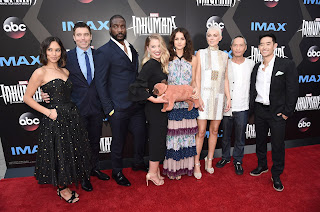 Greetings fans of Marvel and fans of museum based IMAX! If you did not see the first two episodes of the series on a museum screen, I actually will kindly ask you to discontinue reading this review. Executive Producer Roel Reine was kind enough to do an exclusive Inhuman's Interview on Dan's Movie Report, rather than dropping the interview so early, I have decided to wait for a bit in order for the series to be viewed by more people on museum IMAX screens

Admittedly not knowing much about the Inhumans, I treated my trip to the mods.org museum as an excursion taking in the exhibits prior etc, they had a human body experiment complete with a Noomi Rapace like robotic surgery thingy hhhaha, sadly missing Noomi!... Recently The Mods.org museum was outfitted with the 52,000 watt sound system with 12 distinct channels and 114 speakers strategically placed for immersive sound. The only one in the state of Florida, a dual 4k 65mm laser iMAX projection system two projectors yields quality so hard to believe, for example in a particular rain forest style scene we see droplets of water, hairs underneath the droplets, and the splitting of the hairs. Obviously a mall based IMAX, home TV, or any other way of watching will be a huge letdown.

As for the stand alone story, I enjoyed the development of the characters, learned their back story, and by the end of it was immersed in the concept. Roel is a master with the camera, using lush location, tight shots, incredible action. Again though, Roel shot only the first two episodes, and there in lies the problem. As a stand alone film, yes the budget was far lower than Marvel movies or for that matter probably the Netflix series. Roel, exceeded my expectation for the series, with the look, feel, and sound of the film coupled with a lengthy story, with copious dialogue.

The big question lies will it work as a TV series, my guess is buried on Friday nights, and running only Eight Episodes, sadly the is a very high probability it will fail. The intellectual mindfulness, coupled with the dialogue makes for better stand alone 100 minute films rather than a series. The action of course is top notch with Vlad Rimburg in fight choreo, coupled with the supercharged blast of Serinda Swan as Medusa, let us just say she rolls heavy even when ears lowered! Roel gets it when coming into the action with the ladies, he lets them fight hard like the guys, case in point with Scorpion king 3, Selina Lo and Krystal Vee, and Hard Target 2 with sultry Ann Truong and a extra muscular Rhona Mitra! Just wait until you see the sultry Sonya! https://www.facebook.com/alohasonyabalmores/ she brings some real violence, to the cast!

Roel is a master in action, but bases his action around the dialogue. The King cannot speak as his last words killed his parents, yet those around him try to push the narrative. All forms of human foibles are explored. Actually due to the fact that he essentially produced and directed the first two separately , and tied together as one film, will be a big changed when the next person steps in. Never one to spoil the story, I will let the viewer decided, if you can handle intellectual films I would say that the lower budget did not matter as much.

Hard to put my finger on the grade for this probably a 6.5 out of 10, I wish more money was spent. That said, the grade jumps up to a solid 7 in museum IMAX due the filming techniques and ideas, and enhanced character development, with the high powered cameras showing emotion, action and lush scenery up close.