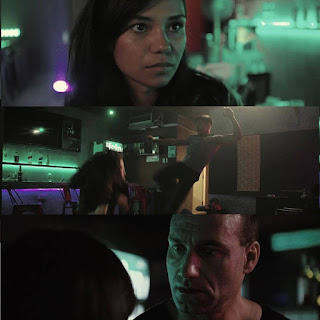 Above Photo: Montage shot from Official Facebook Page of Beyond Return

From the creative mind of Tanja Keller comes this 6 minute blast of insanity. Tanja is a top flight stunt woman, and worked with Ann Truong on Hard Target 2! Tanja has a sultry look, skills and the cool, Imma gonna kick your ass look on her face. Unlike some other ladies, who have the facial scowl she can def back it up with kicks and fists!

Basically things get out of hand in a bar, and Tanja made sure she used her hands and other implements to crush the bad guys!. It is nice to see a stunt person blast out not only with her face out in front of the camera, but her skill behind it. She tells me this is her first foray into film making and I must say, what a hard ride it is. Her character Ann, is trying to get out of the gang that her boyfriend Dave (Ron Smoorenburg) is in. Many thugs and many fists fly. Ron lends is expertise in action and acting and pushes this film up a notch in intensity.

Tanja basically did most all herself directing, editing producing etc... She has excellent action knowledge, and her ideas with camera and lighting are pretty cool. Sound is not quite as crisp, but works decently for what she was trying to accomplish, and will get better with practice on next project. The camera and lighting was done by Andrew Strobridge.

Overall this film is a solid 7.5 out of 10, an excellent first effort. I can say this, Tanja, no longer in the shadows! Step out in the limelight!

Watch the entire film in 4k! Boom! Tanja will kick your ass in Hi Def!