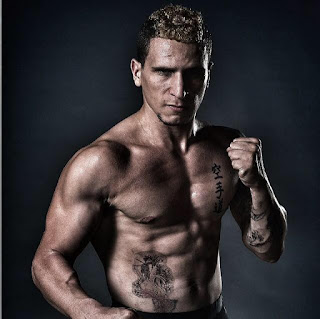 A few years back I had the opportunity to discuss at length with Brahim his filming projects, dreams, and goals. Fast forward to 2017, Brahim is constantly working, striving to better himself, and chats briefly about his work on the hot new Scott Adkins film, 'Boyka: Undisputed'. Take a verbal roundhouse kick to the back of the head with Brahim--- 3-2-1-Go!!!

DMR: Really enjoyed Boyka, how did you get the Role of Igor, what was the casting process like, how long before you started filming after you were cast?

BA: There was no casting process really. Isaac, Tim and Scott knew me from 'Ninja: Shadow of a Tear'. I got cast 2 weeks before flying to Bulgaria to shoot the film.

DMR: Chat about your character Igor, what motivates him?

BA: I think what motivates Igor is to stay undefeated. When Boyka shows up, it's the ultimate test for him to prove he is the undisputed champion.

DMR: How long did you train with Scott prior to the start of principle photography, did you work out some new moves?

BA: I trained 2 times with Scott prior to shooting our fight scene. I honestly did not need to think about any moves or trying to change anything because Tim Man the choreographer is amazing at his job, so I followed whatever ideas he came up with.

DMR: How many days were you on set, and what did you do in Bulgaria on your downtime?

BA: I was on set for an entire month. I had 15 shooting days and the rest was downtime, which I used to visit a bit Sofia (Bulgaria) and also hit the gym to stay in shape as much as possible. 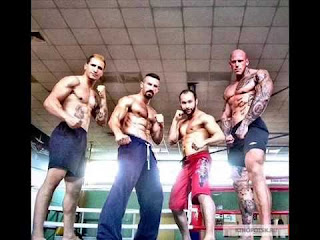 DMR: Have you heard talk of another Boyka or is that it?

BA: Not that I hear of. For now, it's more about supporting this one, and making sure it's making a profit.

DMR: I know you worked on several Jackie Chan projects. Chat a bit about your involvement in Bleeding Steel.

BA: I worked for Jackie Chan stunt team for 7 months on that project. It was shot between Australia, Taiwan and China.

DMR: How do you keep your action training fresh, describe some of your techniques to keep your workout from being boring?

BA: What I do is I train 6 months in a gym doing weights and 6 months outside just doing body weight. It's a good way to shock your body by doing something different. Also when it comes to martial arts, I like to study different styles so I always try to find something new to learn.

DMR: Wrapping up, what are some of the new projects you have working for 2018?

BA: I just completed working in New Zealand on a project called 'The Legend of Monkey'. It's a Netflix TV show, that I choreographed all the fight scenes. I have a Few other projects I can't talk about yet, but you will see in a near future. Thank you Danny. for the interview

DMR: Thanks Brahim, for taking time out of your busy schedule.