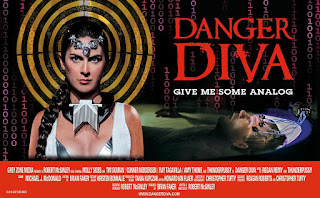 Above: Poster image from Danger Diva!


Greetings valued Dan's Movie Report readers, across my desk comes Danger Diva, a film with so much happening, I actually need to show my readers the synopsis!
In DANGER DIVA, audiences are taken on a dystopia style journey into the near future with hard rock singer Devi Danger (played by Molly Sides) as she is coerced into becoming an electronically enhanced new-music diva. Her singing voice is used to control and energize the brains of indoctrinated employees (also known as “Brain Cattle”) that are being used as external processors for the advancement of corporate high tech clients. Operating in a digital sweatshop, these “Brain Cattle” process binary algorithms that serve as a chorus for Devi Danger.

Yes the plot sounds very ambitious, actually the movie is really fantastic. Perhaps my favorite aspect of the film is the fact that it builds slowly, after the opening concert, which is rather shall we say aggressive, the story of Devi Danger take a more somber tone and she has to decide if she wants an experimental surgery to enhance her voice. Not without pitfalls, but the prospects are a strong for success for Devi as she is served an eviction notice. That is where I end the discussion as not want to spoil the plot.

The acting from Molly Sides is very good, I mean being a musician she can be expressive, of course on stage, acting is a different situation. She handled the dialogue with ease. Plus I liked her turning aggressive, yet maintaining passion to those she cares about. (Ed Note: the band 'Thunderpussy” won their Supreme Court case and is allowed to keep the name, which is correct freedom of speech, and it protects the copyright) The thing is Molly Sides worked so hard on this project with musical aspect and acting she deserves all the accolades for her efforts.

Writer/Director Robert McGinley https://www.imdb.com/name/nm0569334/?ref_=tt_ov_dr crafts an intrepid tale of despair, yet wraps it up in a hope for the future. Although one of his influential films is Blade Runner, this film feels more like the independent film The Gene Generation, a really diverse tale, with many elements. What makes this better than The Gene Generation is the fact that this story has more elements of reality, interspersed with science fiction.

The look of the film, including sets, costuming, and lighting and such are very polished for an indie film, plus the opening sequence was a rock and roll treat! Musically of course Danger Diva is top notch, everything from score to the sound quality of the dialogue is perfect, as it should be from a musical artist standpoint! Overall, this aspect separates Danger Diva from many low budget films, as time was taken to craft the world of the characters.

A word of caution, this is one of those films, that has copious amounts of dialogue, which is actually what I enjoy. Although I enjoy watching the plot and action unfolding, the interaction of the characters is of importance, even with the tech-speak, Danger Diva is a film to be watched multiple times, on this one I watched 3 times to formulate my review. I recommend Danger Diva to rock fans and sci fi nerds! HAH, there I said it!

YES this movie is GREAT, for the appropriate audience! Buy it, Danger Diva rates an 8 out of 10!