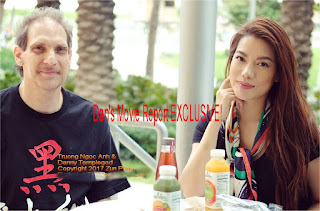 Exploding onto the international scene in 2016 with her first true action film, Truy Sat, executive Producer, Vietnamese actress and TV Show host Truong Ngoc Anh is poised to take the next step onto the Worldwide limelight. She is ready to unleash her talent in the United States film market with a role in the new production of City of Crows, and a film festival run for Truy Sat that began in San Francisco on October 29th with a screening for Truy Sat at the New Concepts Film Festival. Truong Ngoc Anh came to Miami to chat with Danny Templegod for this special and exclusive interview, conducted on Miami Beach. Sit back, relax ,and prepare yourself for the motivational, yet humble intellect that is Truong Ngoc Anh.

DT: Chat about your upbringing, also what was it like in the early days after the war, was life hard, what do you remember about Vietnam in the early to mid 80s?

TNA: Of course I was born after the war, so I did not experience the war. The war is over right now, so I am only talking about the present and the future.

DT: Chat about your creative drive, did that happen at an early age and who were some of your influences?

TNA: I started my movie career being an actress when I was 18. Who influenced me at that time, one of the very popular actors during that era Le Cong Tuan Anh, he passed away a long time ago. He was the one who encouraged me to be an actress. When I was young I had no idea about acting. I mean the whole movie when you watch it is two hours, and I though the filming process was also two hours. When you are shooting once scene can sometimes take a half a day or longer. I look back at that time and there are so many memories. It was funny.

My first feature film was directed by Luu Huynh he is one of the very first American Vietnamese who came back to Vietnam to do a movie at that time.

DT: What was the name of that movie?

TNA: It was called Michael Jackson and Me. Because at that time Michael Jackson was so popular. We made a movie about Michael Jackson and the Vietnamese girl, they fall in love. Her dream for her whole life, was to go to America and meet Michael Jackson. She ended up falling in love with one of the Vietnamese men. Talking about that movie I have one memory that I never forgot. There is one scene I am in where I run out from my house in the middle of the night to see my lover, because at that point my parents really wanted me to go to America, to avoid my boyfriend at that time. After I ran out of the house, I decided to stay in Vietnam. At that point the director said that when you are asleep you are not wearing a bra, nor are fully dressed. He said you should be wearing a very thin dress, under the rain, I said no I cannot do that, because I am still in high school, and people can see under my dress, I don't want that. He said no it is logical to do that in the scene, how can you go to sleep with a bra? I said no, he said O.K., you do it or you go home. I said O.K. I go home. Finally after talking to me I said here is the deal, I have to wear something appropriate for a student at that time. Finally we made a deal about my outfit.

DT: That is a great story about standing up for yourself, something others can learn from. Great poise, even at a young age you stood firm in your ideas. Was there a defining moment in your life that you thought, I have decided I want to be an actress, performer etc...?

TNA: I think I was born with so much passion to act, it is in my blood. Since I was a little child I really wanted to be an actress. I set my goal, and I just go for it. I said I want to be an actress, a famous actress. After that I wanted to be a producer and to have my own film company. This has all happened.

DT: Yes it has, through your hard work and attention to career detail. Fast forwarding, chat about how you formed TNA Entertainment and some of your ideas behind it?

TNA: Actually, Transnational Arts Entertainment is formed by all the first letters in my name, so TNA is not tits and ass, hahaha. As I said prior, I wanted to have a film company to produce all different kind of films. TNA collaborates with CJ Entertainment in Korea, Henry Luk, in China and soon to be in the U.S. I love to collaborate and to bring in new ideas. The audience around the world has a desire to see something new, something creative, the audience gets tired of the same old movies year after year.

DT: What are some of your global goals with TNA entertainment? Chat about who you want to partner up with in the United States?

TNA: Recently I did a movie called City of Crows, the film has a fantastic crew, directed by a woman, two of the producers are also female. They show the female power. (Ed Note: I told her: Someone like you can change the landscape, get rid of the old white guy in the suit, you are the producer of the future. I think that is missing, and something you can provide.) TNA: “It is my honor to work with them, I love the team, I love the energy they bring.”

DT: Chat about partnering with CJ in Korea and Henry Luk in China for films, and the global nature of film.

TNA: Yes we did collaborate with CJ, two films one film was (Huong Ga- Rise) about female top gangster. The second film is Tracer (AKA Truy Sat) the film screened in New Concepts film festival October 29th in San Francisco. Hopefully it will screen in more (festivals} Ed Note: It was accepted to Widescreen Festival and now IDTV Action Fest)that you sent to in 2018. The next film was be with Henry Luk in China in January. That is the one with Andy On and Scott Adkins. Ed note: the latest TNA productions film will shoot with Cung Le called The Target.)

DT: Chat a bit about that  film with scott adkins.

DT: What part do you play in Twilight Zodiac?

TNA: At the end it is going to be big surprise, I turn into an alien!

DT: I think we will leave that for our next interview, I do not want to spoil the plot of a film that has not even been shot yet. Chat about the concert for Truy Sat, how did that come about?

TNA: After finishing the shooting of Truy Sat the whole crew sat down together and talked about how we introduced the movie to the audience. We came up with the idea we can do a concert with a lot of action on it ( the concert has stunts motorbike riding, fighting etc...) I thought it would be something new for Vietnam, so we made it. The concert was very successful and something different for the audience.

DMR: I loved Truy Sat, the cool launch idea, and concert Chat about the finished film Truy Sat and the response, what is next hopefully global film festivals.

TNA: The response from the audience was great, we showed it in Australia, Vietnam, Korea, and (October 29th San Francisco) Hopefully more release news will happen soon. (Ed Note: The film won awards at the New Concept Film Festival including and award for Truong Ngoc Anh as well.)

DT: Chat about partnering with the amazing Chuck Liddell, he kicks ass, does he inspire you to train and work harder?

TNA: It was actually my honor to meet him in UFC Vietnam. He came there to do an advertising campaign, in Vietnam. I am one of the ambassadors for UFC, so we had worked together and he trained me. We also did some videos and a photo shoot together for the whole campaign, it was a real honor to work with him, he is a nice guy. 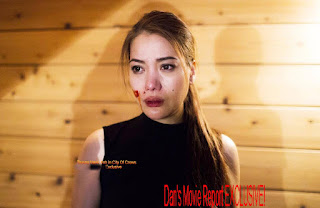 DT: What is on the horizon for TNA new projects and ideas, the new film you are shooting in San Fran and the one in February?

TNA: I am still shooting City of Crows, it is not finished yet, I did a few scenes for advertising in San Luis (California) It was so exciting. The film with Scott Adkins will be shooting for one week in Vietnam and in china for three weeks, it will have an international cast.

DT: Trung Ly is going to be your action director again on the film with Adkins, I am looking forward to that.

TNA: Me too he is a great guy, Trung is the most fantastic action director that I have ever known.

DT: Chat about working in the USA, and more about City of Crows.

TNA: Talking about City of Crows, we were shooting for 3 days in San Luis, what an amazing team, they are so serious and creative, that is a thriller, an action thriller. I play a psychic, but I am doing a lot of action. I get to kick ass. it is amazing to work with Terri Farley-Teruel the director, and executive producer Karen Criswell, lovely people. Also my representative in the USA is fantastic to work with.

DT: What advice do you have for young film makers, and what is the one thing you feel you can change to make the film world a better place.

TNA: My advice to young film makers, just keep moving, do what you think you can do, believe in yourself, keep being creative, nothing is impossible. To me, we have a lot to learn from the older film producers. We are younger, we are very active, creative, full of energy, thinking about new concepts all the time, wanting to do something different. I would love to collaborate with different countries, to show different cultures, to show something unique about each country.

Thanks Troung Ngoc Anh for taking time out of your schedule to fly to Miami and conduct this exciting live interview, the chat was enlightening.