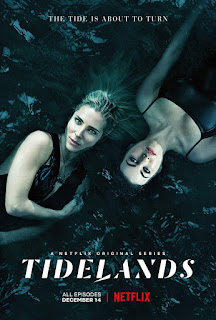 Above IMDB poster for Tidelands

Greetings valued Dan's Movie Report readers. About a year ago actress Jet Tranter who I interviewed for Lady Bloodfight alerted me to a new Netflix series called Tidelands. Incidentally Tidelands is the first series to be produced by Netflix in Australia, this is a big step towards global expansion for the company.

Tidelands season one includes 8 episodes approximately 40 minutes in length and flows more like a series of 3 movies at appx 4 total hours of running time. One episode flows into the next and what is cool is that there is very little title sequencing just a small montage and then it goes right into the previous scene where it left off. I feel that 8-10 episodes for most seasons is plenty and many 13 episode seasons are too long and overthink the story and can lose some of the audience along the way, if the stories are not entertaining and engaging.

Tidelands opens right up with a young lady Cal, played by Charlotte Best who was wrongly convicted of murdering someone by setting a fire. She spent 10 years in Jail and now released she discovers many things about the area she grew up in. Ancient secrets curses, Tidelanders (water people like mermaids who can live for 100s of years) and Sirens. The other complication is her brother is mixed up in some drug ring, this plot is not explored too much, but adds a side wrinkle to the story.

The big bad silliness is Elsa Pataky as Adrielle Cuthbert. She plays a “Queen” of the Tidelanders hell bent on summoning the original mother Sirens. Yes it is as crazy as it sounds, Elsa is a great actress, I first saw her in El Arte De Morir AKA The Art of Dying, she did a great job in that film, and I know she has it in her. This was the perfect portrayal of an Ice Water princess! Elsa did the dangerous icy stares and looked devilish most of the time, and her time included killings and passion!

The external scenes in Australia were shot with care and scope. I wish more was shot in the ocean, but enough water was on the show and some of the effects were pretty cool. By filming series such as Tidelands in various locations they can, give the audience a sense of feel for the town or parish they are in.

Hard to classify the series style wise. Leaning towards mythological more than crime drama, the series also has several action scenes, but not over the top to detract from the story. The audience is brought into the story, also through a seer, Queen Abrielle is able to look into the future so some deft foreshadowing takes place.

Overall Tidelands is a great series, yet very violent and sexual, not for kids. The show offers a unique and entertaining story wrapped up into a well dressed package. Tidelands rates a very strong 8 out of 10, def worth a binge watch! Thanks again to Jet Tranter for turning me on to this series, please check out our older interview @ http://dansmoviereport.blogspot.com/2015/04/actress-jet-tranter-interview-exclusive.html