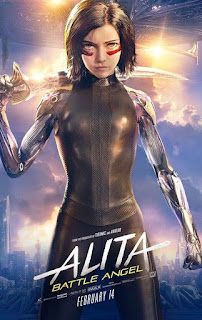 Above: Alita Poster from IMDB. Used for promotional interview purposes only.

Greetings valued Dan's Movie Report readers and of course readers of Action-Flix.com Today is a special treat, I was holding this interview for a bit to celebrate the release of the massive Battle Angel film on Valentine's Day. The Interview was actually part three multi part interview, this is the final chapter for now. I plan to revisit Marko following the release date of Battle Angel and as we get closer to the release of Invincible! Sit back, relax, get some tea, and soak in the sun of action with Marko Zaror, Honor in action 3-2-1- GO!!!

DT: I know you are excited for the impending release of Alita: Battle Angel coming up on Valentine's Day amd are not allowed to chat about plot details, but chat about your experiences on the massive 200 million dollar production from James Cameron directed by Robert Rodriguez.

MZ: The experience on Battle Angel was great, I already completed all of my parts awhile back. I had a short period of rest then had to return to continue filming. I am just so honored to be part of this production. Robert (Rodriguez) just called me direct and said Marko, I have a role for you. I must say being part of that world is amazing. I can honestly say this is the most amazing experience I have ever had on film. In terms of production everything it was just on a massive scale. It was like being transported to another world. To be a part of this project was amazing, I am just so happy and grateful.

DT: Discuss the set of the production must have been astonishing.

MZ: What I can talk about is how amazed I am with the technology used in Battle Angel. The production size and scope is just huge, yet everyone on set is a total professional. How they are working integrating all this animation to the production while we are acting. It may be common, but I have never seen such a technologically advanced film set before. For example I never saw someone acting and then in a screen next to the actor, there is a CGI robot right next to them. It was asttonishing. I have dots on my face and body to superimpose my facial features in an animated yet realistic way. The camera used it to motion capture the movement. So in the screen next to it you see your character and what you are landowning acting next to you It was a surreal experience! I am really looking forward to the release and enjoying every moment! 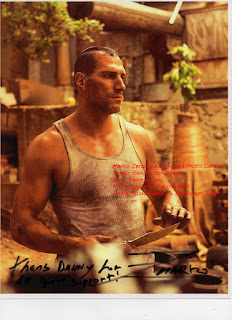 Above: Autographed photo from Savage Dog, new contest to begin later in 2019!!!!

DT: Thanks Marko must have been a wonderful and enlightening experience, wrapping up this brief preliminary interview, what are some of your long term goals and what are things you would like to change about the action film world?

MZ: for future projects, I just first would like to state how happy I am for my career path this year. I am always trying to stay open to new experiences and new collaborations., that is my plan. I am wanting to stay open and connected to my inner self. I want to make the right decisions. I want to be picking and choosing the right projects to be involved in. I am hoping eventually we complete the Zambo Dende project ( it was never completed as of 2019) actor Darren Shahlavi passed soon after the initial short was completed) Zambo is a character I would love to represent. He is such a strong character. I have a lot of projects (Invincible just completed) I have a project that I am writing and developing so I will see where that goes.

DT: Thanks Marko as always great work on the interview.

MZ: Yes Danny, thanks to you for always supporting the action world, and my career.

Watch for more exclusives on Dan's Movie Report, and the top action site on the web www.action-flix.com