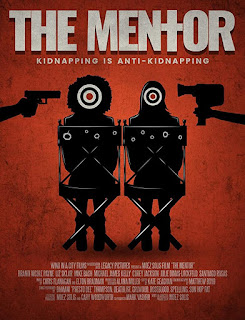 Above: Poster for The Mentor from IMDB used for promotional purposes only.

Greetings valued Dan's Movie Report readers across my desk today comes a film called 'The Mentor'. Watching the film, reminds me of a mix of 'Eyes Wide Shut' and a very wordy yet intellectually dark and Sardonic comedy, that turns into a thriller. Producer/Writer/Director Moez Solis, really has an excellent script, actually the dialogue is far above the skill level of most of the actors, yet one incredible standout performance that is so good, and aggressive, I promise is worth watching. Liz Sklar as Clair Adams breathes fire into her character. Actually if Moez had additional funding, and found more pro theater actors like Liz 'The Mentor' really would have more impact.

The acting is not bad by any means, but this level of intellectual and nuanced dialogue really requires a pro delivery. Brandi Nicole Payne as Nilah, does an average job as the lead character who is supposed to be playing kind of a newbie. The other acting is decent, not horrible, but the emotional level shown really needed to be ramped up. In the defense of the actors, towards the end of the film it does get better. 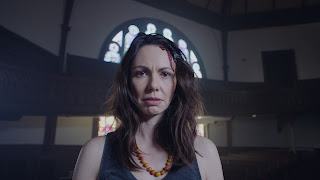 Liz Sklar emotes, when she is scared she shows it, when she is pissed off she shows it. When she gets angry curse words don't just come out, they come out with panther like aggression. Due to her experience, her body language tells the story. Liz has physical acting prowess, not just delivering the lines with her voice but her movements belay her emotions. Please someone get her a lead in a big budget horror or action flick.

Actually Brandi's aggressive nature comes out a bit, but it seems that the level of talent is just not up to the standard needed to carry 'The Mentor'. She does some voice over work to tell her story, I kind of wish the narrative would have only been in the beginning to set up the story, almost superfluous as the story unfolds.

Many of the characters wear masks, and much of the film takes place in only a few locations, which is fine as the less distractions are better for the enjoyment of the terse, vituperative, and slightly disjointed story.

I had to watch the 74 minute film two times to give it a rating. A first pass skewed lower, the second viewing reveals the more subtle madness of The Mentor. I mean the copious amount of times Liz says Mother Fu@$er are damn cool, and I envision her as this crazy blood soaked villainess in a film. 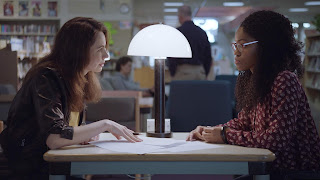 The Mentor gets crazy in the second act, no spoilers, but I dig the developments, and interplay between characters. Brandi Nicole Payne gets into the acting and unleashes her performance skill, still though I was searching for more emoting and impact.

The behind the scenes accouterments on this budget are quite good, clear audio, all the scenes are well lit, and the ADR is clear in the headphones. Scenery and costuming are very basic, but in this case, The Mentor is all about the dialogue.

Overall The Mentor is a mixed bag; Liz is damn amazing, some average inexperienced acting, and a wonderful script. The Mentor rates a 6 out of 10. I would say the film has a very specific audience, intellectuals, Warner Herzog, and dark comedy fans.

For now best place to check out the film is the Facebook Page @ https://www.facebook.com/thementorfilm/
IMDB page has full credits for 'The Mentor' @ https://www.imdb.com/title/tt7922944/

Liz Sklar has been in many stage productions, check out her
Theater page: http://www.abouttheartists.com/artists/326791-liz-sklar