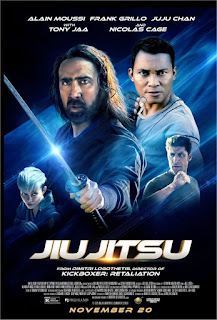 Above: Movie Poster for Jiu Jitsu (C) 2020 Paramount, all rights reserved not monetized.


Greetings valued Dan's Movie Report readers, across my desk today comes my action pick of the year! I have always loved the original 'Predator', many have tried to replicate this fantastic film from the 80s

Filmed in beautiful Cyprus, Jiu Jitsu, tells a tail of an alien, who is never specified from which planet, comes every six years to fight. Not entirely like the predator,because it hunts warriors, but oddly warriors who it is specifically pre-determined to fight.

Bear with me, the story is clever. Essentially the filmmakers have created a martial arts version of the Predator. The title of Jiu Jitsu, is a bit odd as there is very little actual Jiu Jitsu in the film, but there are hints of it, when lead Nicholas Cage mentions 'leverage'. Actually this did not deter from the story one bit, there are comic page fill ins, presumably if this becomes a series of a sequel happening. The story has a nice set up in a secret military base, in fact the first twenty minutes was a solid groundwork for what was to come.

I refuse to reveal what happens in this review, nor spoil a thing. Honestly, this belongs in a theater. The Sound, even on my headphones was phenomenal. Musical scoring was theatrical quality. The camera work for the most part was creative, innovative, and enjoyable. There are some very dark scenes, but only minor quips about them. The locations used and sets were very good, I am not entirely sure of the total budget, perhaps in the 10-25 million dollar range. Again this is not a 200 million dollar Marvel film, but creating an R rated universe.

What we are here for as action fans, is the action! There is a HUGE amount, but what I loved is it is interspersed with the story. Tony Jaa is absolutely amazing, gravity defying. His initial scenes are filmed super clear in the day and it is damn epic. His fight is long and enjoyable. I enjoyed all of the stunt work in the entire film for that matter. In the credits the scaffolding company was credited and thanked!

Logistically, a huge amount of behind the scenes work is involved in shooting action. In Jiu Jitsu there is a great attention to detail! Director Dimitri Logothetis does some great work here with the actors and they have the intensity to convey the action.

Nicholas Cage, brings his sardonic humor and impressive acting to the film. In addition to that is a translator, who adds humor and some intellect to the proceedings.

Actress JuJu Chan provides the cunning and guile. Creative use of her extensive martial arts background is used to great effect. Actually, she gets to do a bit of narration. I really like how clear the audio was for the speech, for all of the characters!

The key here is a correct amount of everything in a 102 minute movie. Actually they packed much in, and I can see this being expanded to a series, or a second film, though it can be a fine stand alone film as well. Kudos to all involved more to follow.

Jiu Jitsu ranks an amazing 9.5 out of 10, my action pick of the year, and a must own! The film is available November 20th on various outlets.