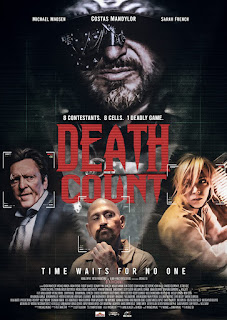 Above Image: Poster for 'Death Count' (C) 2022 All rights reserved, image used for promotional purposes only, not monetized.


Greetings valued Dan's Movie report readers. Across my desk today comes a brand new horror film called 'Death Count'. The movie is in the tradition of the 'Saw' franchise in that several people are locked in a cell, and have to perform various tests and tasks to survive. The twist here is each person is locked in their own cell and have a collar attached to them and an explosive implanted at the base of their neck.

Costas Mandylor plays Warden, the one in charge of the game of torture. He provides each of the contestants with a tool box full of weapons for them to do self harm, thus gaining cyber likes, people are watching the game and evaluating each of the contestants. The rules are harsh, the warden makes all of them and if they are not followed heads explode, literally.

'Death Count' is ultra bloody, excruciatingly violent, and more of a gore fest than horror. Of course the audience will cringe at several scenes including, minor spoiler, one where a lady has to pry off her own fingernail. Kind of like a gruesome car wreck, it is hard to look at, yet compelling and hard to look away.

Though the movie is really violent and several people meet their demise, I feel that we learned very little of the characters, except their basic profession, and other minor traits. When one of the characters dies, I just am not really emotionally invested, that said, 'Death Count' does what it sets out to do and that is show people's fear and has creative ways to torture.

Acting is surprisingly decent for a horror film, no one goes all over the top, thus ruining the scares. Actress Sarah French seems to get the bulk of the screen time, she is enticing and talented. I actually felt sorry for her and her situation,she does an amazing job of selling the terror, anger, and confusion she has at various parts of the film. Actress Devanny Pinn though with a smaller role has a particularly crazy scene, she sells the scream queen role, and seems to revel in being scared and sexy at the same time.

Michael Madsen as Detective Casey and Costas as Warden are given the bare minimum fodder for acting, with Costas being shrouded in a half face covering. Once again I am assuming that the idea of the Warden character is a faceless man who is there just to torment the contestants and it does not really matter much who he is or his situation.

Behind the scenes 'Death Count' delivers a well filmed effort, the scenes are clear and even the dimly lit ones are easy to make out and see. Sound is clear, all of the actors emote their lines and sounds clearly having impact when they are in pain or worse. The setting is a basic prison, with little in the way of additional scenery save for a video camera in each room. Drab, and foreboding is the key to 'Death Count' and I am sure it is done on purpose.

'Death Count' movies at a brisk pace, no wasted time. The 81 minute film directed by Michael Su, is just entertaining enough to warrant a recommendation, Violent and reprehensible, 'Death Count' should keep hard core gore horror fans entertained, and casual horror fans engagingly interested. The film comes out July 19th on various streaming platforms, and rates a 6.5 out of 10.