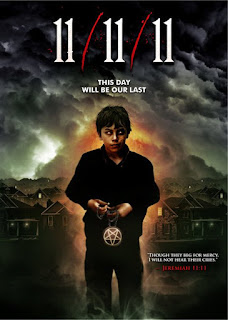 This is one of those films that sneaks up on you. Admittedly I had rather low expectations for this but was pleasantly surprised by the film. I found 11/11/11 to be a tight, crescendo building thriller only laden down with some rather wooden acting.

The story opens rather bloody (minor-spoiler) a family is massacred in the house at a party. A new family moves in and consists of a Professor father and a stay at home mom and a very creepy son. The neighbors seem all to friendly to help out, but obviously have sinister motives when those who don't go along with their plan are silenced.

One by one we meet the crazy town folk, an old neighbor who lost her cat, a guy on a bike who warns the family, a couple across the street who are just plain odd. The creepiness really begins when The child tells his mother she is pregnant and even she doesn't know! Soon she is forced to bed-rest and the nanny interview process begins.

I won't spoil how the nanny is chosen but "whoa Nelly" she is hot and she is evil. Aurelia Scheppers as Denise is truly the nanny from hell. In one scene she is with the boy and he is looking at a butterfly through a coke bottle, and she turns it and shows him how to burn the butterfly! She is by far the best character and actor in this film and breathes life into the plot, I am sure she will get a myriad of roles after this. 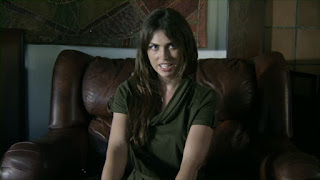 Denise (Aurelia Scheppers) Butterflies are not all she hurts!

The Parents of the boy Jon Briddell as Jack Vales, and Erin Coker as
Melissa Vales are rather wooden in their character formation, but I can see they are trying their best.

Hayden Byerly plays Nat Vales , the son,and the potential child of evil. I found his character to be well thought out. Even though he had few lines, he had to go through emotional changes, and made the story entertaining to watch. 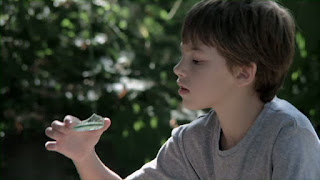 The story builds and you all would kill me if I spoiled the ending so go see it! I will tell you all to watch-out for the satanic undertones!

Get it on Amazon @
Posted by Dan's Movie Report-Danny Templegod at 6:21:00 PM