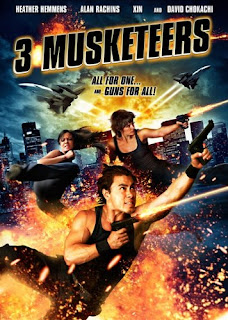 The Asylum is really stepping their game up in the action dept! 3 Musketeers is a balls out, balls up action flick and how the heck can you go wrong with David Chokachi as the evil villain, spikey hair and all, and a tag-line "All for one and guns for all!" HAHA!

In this film the evil General wants to start a war with north Korea by killing the President and making it look like it was the Koreans, by timing it the day he was supposed to meet with the Korean leader. 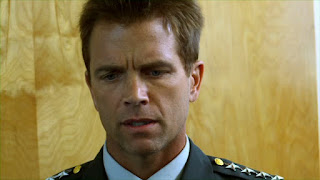 David Chokachi as The evil General is a long way from the Baywatch beach!

Our film opens with an action sequence to die for, as in some of the villains died by the hands of our our crack three musketeer agents. There is even an odd fight scene as a sword is used by the female agent Aramis (Michele Boyd) and she is wearing a bra and panties, she used her guile to get to the compound, cause it sure was not her acting prowess. She does look pretty nice, her fighting skills are passable, but not good. I am sure she will get better. Martial artist Xin on the other hand brings the pain especially when he takes down one of the huge guys, with his machine gun belly punches.

There are several cool stunts in the film including a full fire burn. All of the stunt people on this film should be commended. Hate to get on my high horse cause I will fall off, but stunt people in all films deserve respect and an Oscar at the awards for their hard work. Check out stunt woman Mam Smith stepping in front of the camera with dialogue in 3 musketeers, playing evil agent Winters. She was a good villain, part maniacal and part cute! Now I carefully dismount my horse and resume the review.

Besides Xin's fighting, which was tight, fluid, and at times microcosm of maniacal energy. He even jumped a railing shot his gun and a barrel roll, epic! He has decent acting chops not so wooden. he is charismatic onscreen as well. 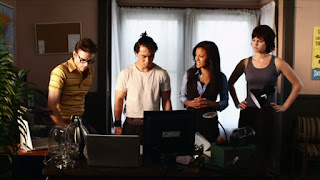 The performance of the film goes to Heather Hemmens (Agent
D'Artangan) she comes in the movie about 15 minutes in because she is transferred from her desk job. Heather is an excellent actress, has a crystal clear speaking voice, expression laden face, and obviously trained hard to get her fighting skills somewhat decent. Her and Xin would make a good team on a film together! she eventually has a sparring fight with Michele Boyd with a sword when they first meet and on of the other agents says the smart thing "never get in the way of a chick fight!" 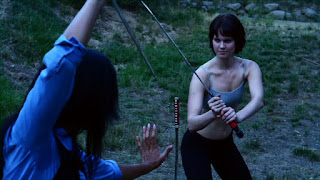 Cat fight, note to self steer clear, cause someone could lose and eye or break a nail!

Suspend belief at the door with a helicopter vs radio drone jet firefight, but hell it is original, and very amusing. Overall this was a great film with satisfying ending and with quotes like when the team gets in the low budget helicopter "For a knockoff this one's got some sweet toys." (a dig on The Asylum") and a fight scene ends with one of the characters drawing their weapon and saying "gun beets axe" in paper beats rock style.

The story is well paced and moves along no down time. Listen for some witty dialogue, and a plethora of action as this film has repeat watch-ability. I rate it a 7 out of 10. This is a definite purchase!

All of you put one of your browsers to Amazon to buy it! Direct link!
Posted by Dan's Movie Report-Danny Templegod at 12:57:00 AM