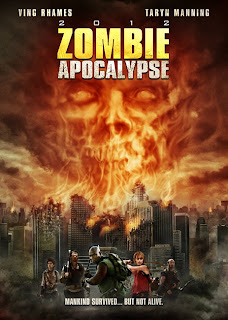 The debate rages on among zombie enthusiasts, should they be slow moving or fast? My philosophy is that while the slow and lumbering zombies represent the original concept and idea, the rapid moving evolutionary aspect of the "newer" zombies is rather interesting. With Zombie Apocalypse, the viewer doesn't even have to make a choice because there are a little of both. Some move slow, some lumber, some limp, and some run, something for everyone. 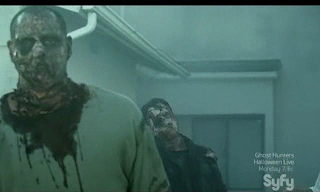 Zombies are a coming in Zombie Apocalypse!

Zombie Apocalypse follows a ragtag band of survivors looking for refuge on a mythical island named Catalina. Ving Rhames and Taryn Manning star and lead the charge. I thought this was not too bad of a Scifi movie from The Asylum. The sets were decent for a low budget film, sometimes a bit sparse, however the CGI blood was kind of tame. I think the actual make-up should have been more complete, some of the zombies were not overly convincing.

There is some character development, not as much as the high quality The Walking Dead series. The development is on the fly as the group is always trying to get either avoid or run away from the oncoming zombies.

The acting in the film is average, Ving is his usual forceful self. I liked the character Cassie portrayed with intensity by Lesley-Ann Brandt. I thought she stepped it up and had some decent lines and some cool kills with her sword. She is a good actress and pleasurable to gaze at. Check her out in Spartacus. 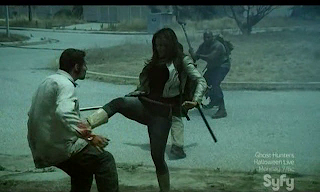 Cassie (Lesley-Ann Brandt) allows a zombie to feel the end of her boot!

Zombie Apocalypse actually releases to home video from The Asylum in December. I rate this film a 6.5 out of 10 a definite rent and possible purchase if you are a zombie fan.