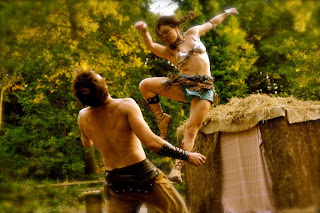 Above Pic: You sir are on the wrong end of a flying knee! Cecily Fay as Boudiccu

Ross Boyask and Cecily fay are putting the finishing touches on the film Warrioress. The film is a female centric story and follows the epic journey of two powerful female warriors Cecily Fay as Boudiccu and Joelle Simpson as White Arrow as they travel across the land to fight a ritual dual and fulfill an ancient prophecy. 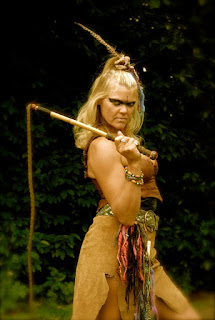 This is one lady that you want on your side in battle! Joelle Simpson as White Arrow

Seems easy enough except there are evil dangerous assassins lucking at every turn. Ms Zara Phythian portrays Falonex Assassin 1 and will stop at nothing to deter Cecily from her most noble goal. Warrioress promises to be full of action, and copious amounts roughness from the ladies, who bring decades of martial arts experience into the fold. Cecily just completed her work on Snow White and the Huntsman, she is a force beyond comprehension, because her sword work is legendary and lightning quick.

Judging from the pic below, many foes will be vanquished! One bad day to be a ninja! 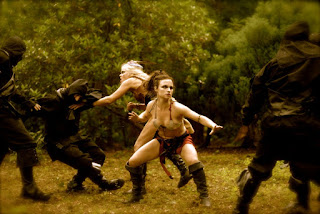 Remember, 2012 is the year of the Warrioress!