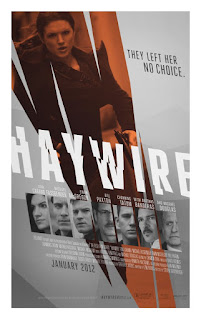 2012 is the year of action on Dan's Movie Report. What action year would be complete without a viewing of Gina Carano's debut effort Haywire? Steven Soderbergh directs this tight 93 minute film, which puts Carano at the center of the action and puts veteran actors like Michael Fassbender, Ewan McGregor, Antonio Banderas, and Michael Douglas at her mercy!

The film opens in a seedy diner and the action gets rolling. Gina is beautiful in a dangerous scary sort of way, I do wish that she showed more emotion and energy in her facial expressions as she does in her fighting ability. This is a serious film, but even in the lighter moments such as her being asked to be eye candy her facial expression never seems to alter. I am sure she will work on this for her next effort.

Haywire is an important experiment in the world of action films. With a 25 million dollar budget, major stars attached, and the first true female fighter as a star it remains to be seen if the US or the rest of the world is ready for such a gritty realistic film which the lead character is a female. My prediction is that it will fare far better overseas than in the US as other countries seem to embrace the strong female character. 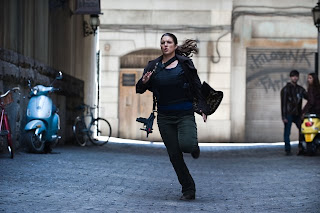 Above Pic: Gina runs in Haywire. Thank your stars she is not chasing you haha!

As the film progressed I wish I was able to witness one other strong female character. I think Haywire should have brought in another lady from either the MMA world or the martial arts world to combat her. Although Gina has a difficult time with the actors she faces, as they underestimate her, I think a major female nemesis would have balanced the story, thus adding to the excitement and energy.

Haywire was shot using the digital RED cam, which has a dark, yet film like look and works to set a foreboding atmosphere throughout the film. Steven Soderbergh obviously took a lot of time to set up and frame each shot, the background and set props, although minimalistic at times added to the film's realism.

The fighting and action are of course the true highlight of Haywire. This is not swords and wire-work, there is no beauty to being rammed to the floor as a table lamp is knocked over. Although she is a bit soft spoken for a special ops agent, Gina will kick your ass if you mess with her, and proves that time and again. She has power, and also knows where to strike an opponent to cause maximum damage.

I really struggled with the rating on Haywire. I loved the action, but wish the film had a longer running time to learn more about the characters. Gina needs a few more films to properly hone her acting skills. She is rough around the edges as an actress, but that is to be expected. I give Haywire a solid 7 out of 10, a must see for the action, and to support women in action films.