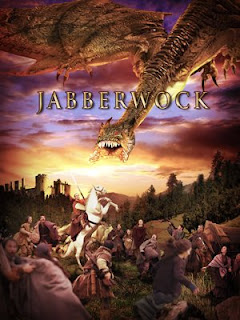 Above Pic: Jabberwock Poster
Not sure were to begin on this tepid tale of an odd looking dragon terrorizing a small village sometime in the past. Might as well begin during the opening scene, which finds two horse riders in the mountainous dry terrain, then all of the sudden a man finds an egg shaped object. Lightning strikes and blamo there is a full sized adult dragon after them. One guy is killed then the other finds his way into the nearby unsuspecting sleepy and rather boring town.
The acting on this film is just so dull, there is very little sense of urgency. I mean really if something was chasing me, that could not only easily eat me, but eat most of the town, I would panic, run, scream, fight, or do something. Most of the actors and actresses are relatively inexperienced, I did notice Michael Worth putting forth some effort as the warrior Alec.
The story continues as some folk in the town are killed, but a cute young girl, Jocelyn  played innocently by Violeta Markovska is captured by the dragon presumably brought to the dragon's lair for food for the new eggs about to hatch.
Now I am all for catching cute young Bulgarian girls, but that is another story, for another post, but this dragon is just crazy! Well the town folk devise a way to capture and eventually kill the Jabberwock. Finally, by the third act, a bit of emotion and sense of impending doom is added to the liveliness of the story.
I did like some of the plot ideas, but the acting was not so moving, it was kind of like day old bread, you will eat it if it is there, but would rather eat a fresh bakery loaf. Some of the scenery was nice, and the CGI dragon was average, but won't tingle your toes for awesomeness Haha.
Overall I give this dragon pile Jabberwock a 4.5 out of 10 a marginal rent or watch on free TV. I do give the Bulgarian lady an 8 on the hotness scale, if that means anything.
Posted by Dan's Movie Report-Danny Templegod at 12:57:00 PM