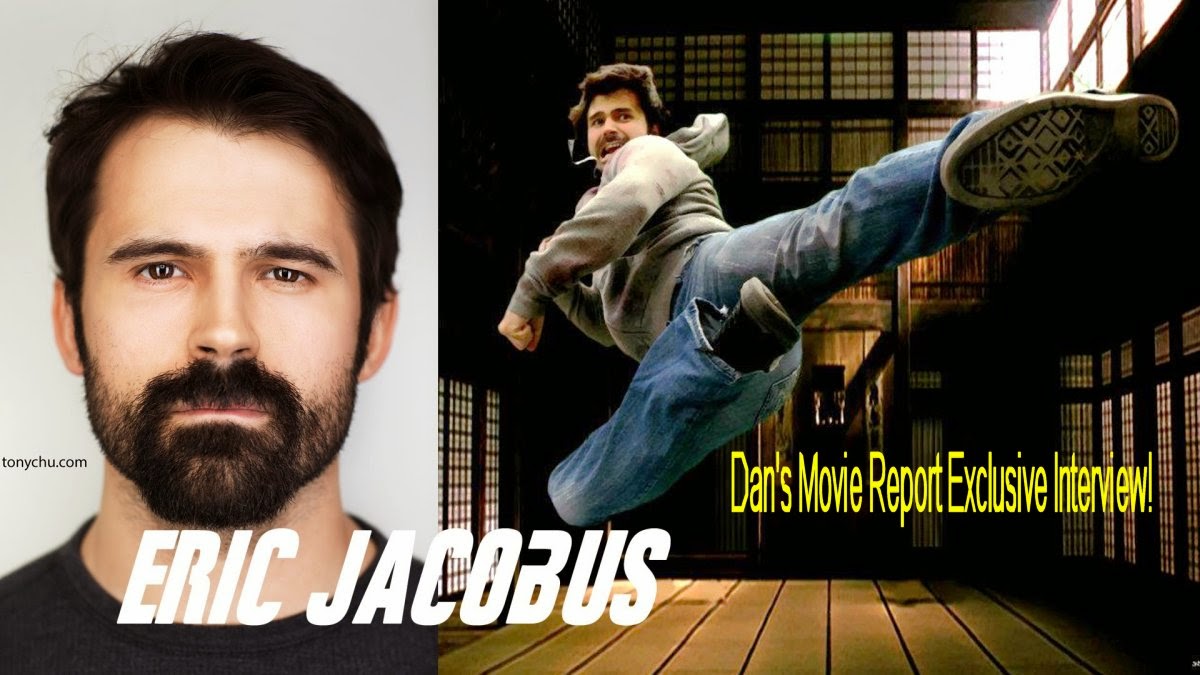 Hard to believe it has been over a decade since I first wrote about Eric Jacobus and The Stunt People. Eric is a true innovator in short films, after out interview last year http://dansmoviereport.blogspot.com/2014/06/eric-jacobus-interview-c-2014-dans.html  I chatted with him and decided the time is right to complete a Rope A Dope 2 chat, and delve deep into the mind of madness, and travel down the rabbit hole of action it is time to grab a cane, a frying pan, and sit down and listen to the textual maleficence that is Eric!

Ok! Eric, let us get right into it, tell my audience what made you decide to revisit the Rope A Dope theme and do a second one?

After I made the first one, everyone would tell me, "Eric, it's so awesome that you just played a total idiot in a movie! It's so you! You should do a sequel!" I guess you do what works! Plus we alluded to a sequel at the end of Rope A Dope 1. My producer Clayton Barber knew we could make a killer short, and I set out to really improve upon the first installment in the action and comedy department. Clayton comes with a ton of experience in the professional stunt and producing world. We're building a brand with these films - action guys making action movies. 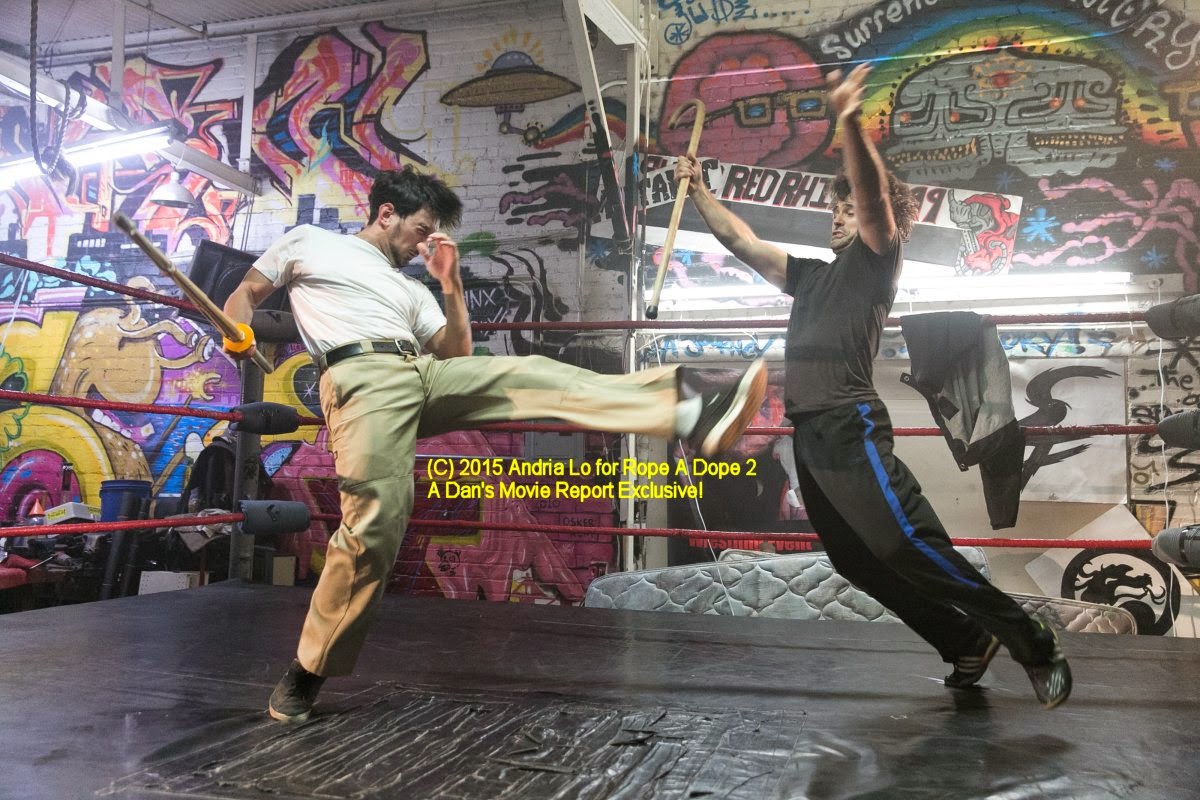 I know there was an issue of the robbery, I realize equipment was stolen, how much of the footage was missing? Did you have to do re-shoots?

We shot maybe 3 hours that day, not a huge loss. But the worst part is there was footage of me doing a triple back-flip quadruple twisting corkscrew butterfly sideswipe while juggling 5 chainsaws and landing on an egg without breaking it, but the proof of that is long gone now. Sorry! And yes we had to re-shoot that scene, but we used a different actor and did it on Treasure Island. There were people on Treasure Island who wanted to steal our camera too, but we came armed with AK47s and rocket launchers so nobody messed with us.

Enough on that, ok I get it, BTW Michelle Lee has an AK47 and is adorable, I see you are well armed and well off kilter with humor. I noticed the addition of a lovely lady into the fray Ashley, was she a role that was auditioned for, or written into the script, with her in mind?

I've been waiting to put Ashley in something for a while, it was my pleasure. The guys got all flipped out when they found out Ashley wasn't wearing any pads for her falls. I forced her to wear some. Bridger Fox did a bang-up job too. The two of the know how to wreck hard, but they're in it for the films. That's what makes a great stuntman or stunt woman - doing the wrecks for the project, not for yourself. 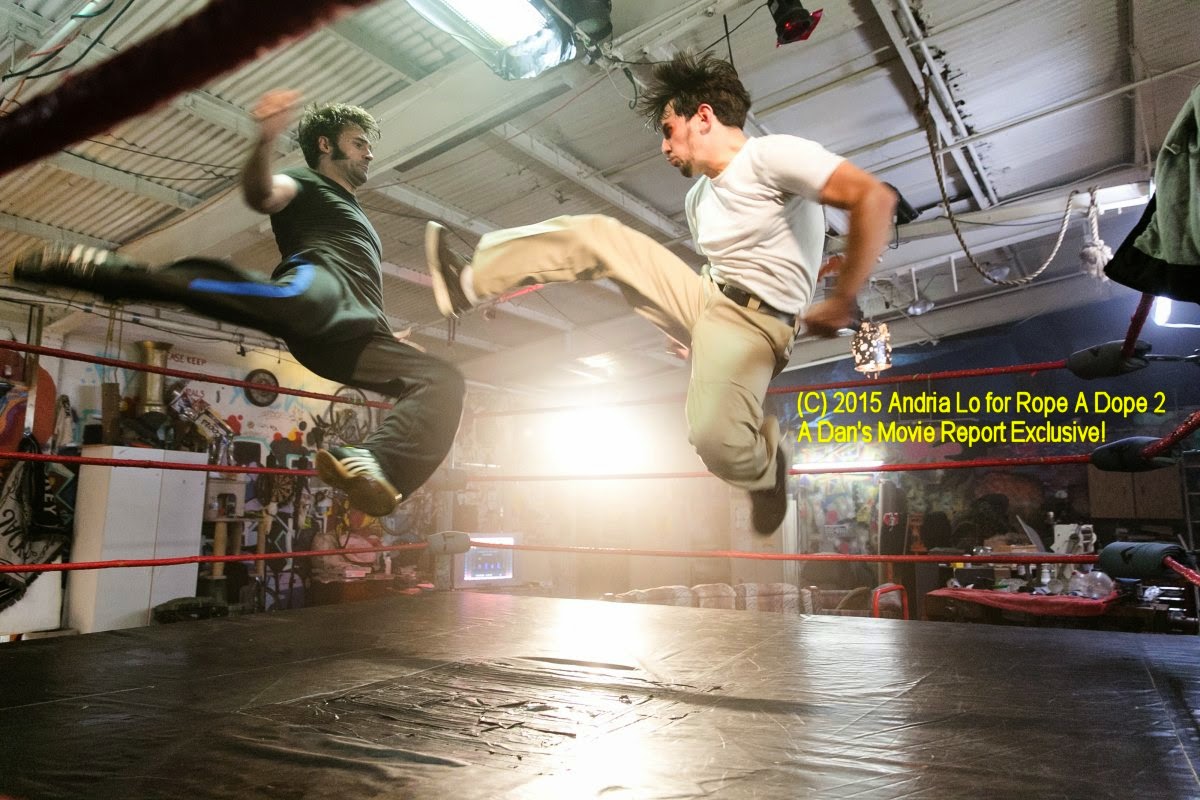 Chat about having women in action films, not your films necessarily, I think the landscape is changing positively for female action stars to emerge.

My favorite female action stars are from my childhood. I think Ripley in Alien and Aliens is the best female action heroine of all time because her motivations really made sense. I like rooting for the guy next door, the underdog. I feel the same way about female action heroes. I actually wish there was more of a focus on female underdog action stars these days, and they don't have to be funny, just underdogs. Julia did that really well with an alcoholic, overly-driven woman who suddenly has to take care of someone's kid. Even the girl in Pan's Labyrith was a throwback to Jennifer Connelly in Henson's Labyrinth, a small town girl in over her head. That kind of character really reaches across the aisle and could be made even better if she's physically capable. The question is whether a stunt woman would be willing to play a vulnerable character. If so, that'd be freaking awesome.

Rope A Dope 2 is almost 18 minutes, and has no dialogue, discuss the art of non communication, in the film. I am assuming the comedy and action tell the story,  I liken it to a silent film of the 20s, but yours has 80s themes.

I'm just funnier when I move around. I got bullied like everyone else and was never good at witty comebacks, so movement and physical comedy have always been my weapons. I was raised on Vaudeville comedies like The Three Stooges and Laurel and Hardy. Much of the dialog from that era is pretty dated, even Jackie's dialog is pretty forgettable, but the movement always stands the test of time. I want to make the same contribution.

I read your posts, are there possibilities for a feature length dialogue laden Rope A Dope film?

I'm gonna fall back on non-verbal communication for this one and just say "".

I know this is non Rope A Dope related, have you heard about the 3rd season of Mortal Kombat Legacy?

There's a 3rd Season of Mortal Kombat Legacy? Am I in it? Please tell me, I'd love to know.

Back to Rope A Dope, do you feel that the humor in the film is as important as the action, more important than the action, or it does not matter more of a an individual opinion?

The comedy is the centerpiece of the story for us. That's what we hang our hat (and cane) on. We serve the martial artists with the action and I put the same effort into that as the comedy, but we tell stories the same way Jackie Chan and Chaplin did - through set pieces and gags. Sometimes I use martial arts to solve puzzles, like the final move (the "jack-sweep") against Dennis, but that's still a comedic callback to when Ken was kicking him every day in the ring. I managed to convey a martial arts-based gag to non-martial artists. I considered that a major victory. 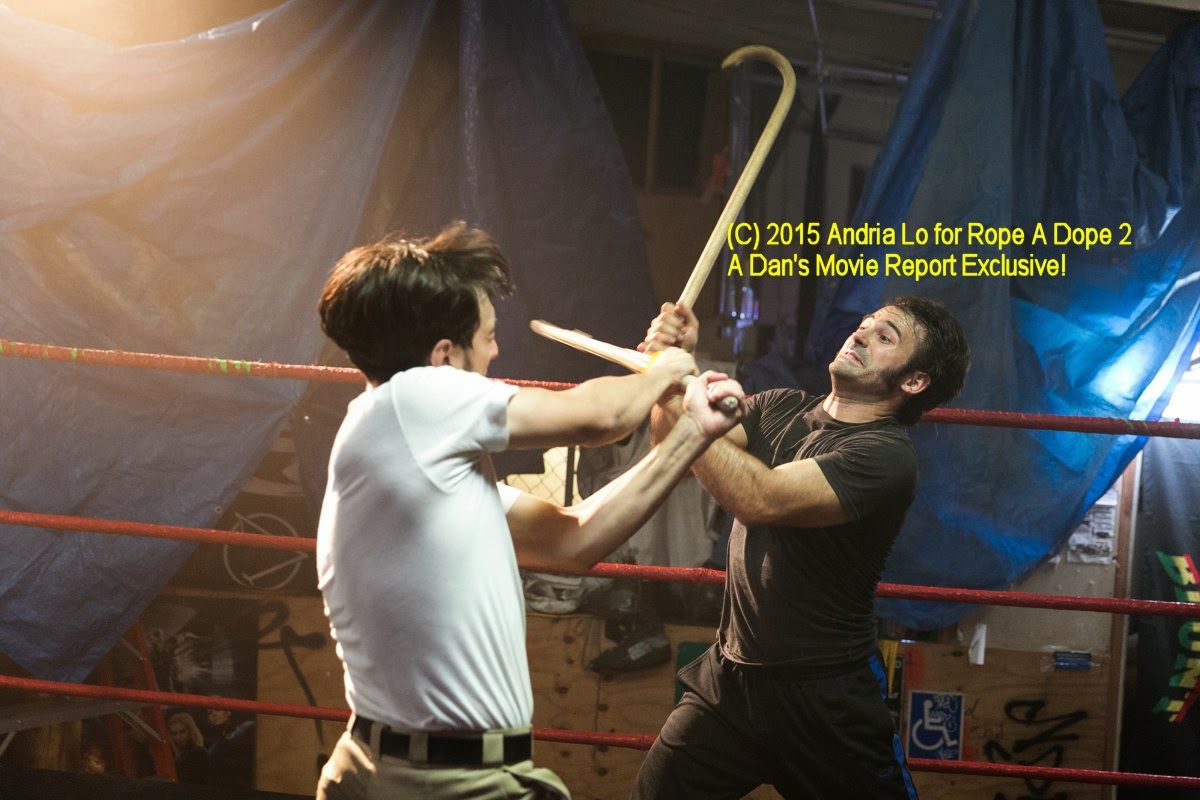 Speaking of other short film makers, who do you watch for, when you are not working on your own films?

I'm always watching the Facebook feed. The indie stunt world is so big now. Gui DaSilva, Tim Man, Brendan Huor, Xin Wuku, and Alvin Hsing are marvels to watch. Samantha Jo, Michelle Lee, and Mickey Facchinello are stars in the making I hope. Vlad Rimburg and Emmanuel Manzanares are really pushing the limits with their choreography. The Young Masters and Martial Club nail the traditional style, and EMC Monkeys and Mag Fighters do great modern work. I feel like I'm just rattling names off the top of my head and I'll think of ten more when this article is published, and there are so many other talented groups and players out there. Lee Golden's Film Combat Syndicate at filmcombatsyndicate. blogspot. com does weekly reports on all the latest videos and I encourage martial art movie fans to check it out. Each week there's always something spectacular.

How about feature films? Have you been approached to either be in one, or turn one of your films to be expanded?

There are some feature film projects in the pipeline right now, but if I told you more I'd have to kill you.


Chat about the changing landscape for distrubution for short films, seems like Youtube is the primary, and prospective to do a Rope A Dope DVD with both films and behind the scenes?

I think the dream of making a living off YouTube is fading for most martial art filmmakers because it's just not the right model, but it's been the best place for us to get exposure. Before YouTube came around we had to buy FTP space and pay for bandwidth overcharges and encode our videos at 320x240 15fps to conserve space. It was a nightmare. Back then, we got noticed because we had a short film on the Everyone Is Kung Fu Fighting compilation DVD made by Jeff Centauri. That's how I got my first gig, which led me to the investor for Contour, which put us on the map and got me to where I am now. So I owe a lot to that old model, but YouTube really saved us all.

It gets tricky now, though, because the technology that enabled YouTube is making hard media obsolete, and it's the same technology that's dropping the barriers to entry into the film making market, so monetization is only going to get harder. Film making will probably become more like painting and photography where it stops being a means to make a quick million and retire. Now it's a lifestyle, and the only people who can survive in this market are the ones who both commit to it and find their voice. Those are both very difficult.

As for Rope A Dope on DVD, you can buy a DVD of the first one at our online store here http://stuntpeoplestore.bigcartel.com and we'll probably do another DVD for Rope A Dope 2 before Comic-Con this summer.

The Stunt People will go on as the brand of the stunt team, not the production company, since it never really was a production company. Clayton and I have become that, so you'll see a lot of Barber Jacobus Productions in association with The Stunt People the way Rope A Dope 1 and 2 were. Barber Jacobus will push on with more short films, and I've got a few old SP projects on the backburner that just need to be edited, but all the shorts I do will go onto the /stuntpeople YouTube channel. And in 30 minutes I'm heading to gym to work more on The Kicktionary Volume 2.