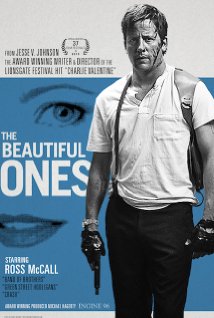 Above Photo Credit: Initial Poster for The Beautiful Ones, (C) 2015


Variety has reported that the Jesse V. Johnson film The Beautiful Ones has been sold and finishing funds are secured, courtesy of ! http://variety.com/2016/film/news/ross-mccall-beautiful-ones-funding-1201824033/#comment-list-wrapper

The film screened at The Action On Film Fest and The Widescreen Film and Music Awards. At the Widescreen Awards Jesse won best director, and the film garnered several nominations and other awards.

Jesse's honest no nonsense approach is refreshing, and it is evident in his work, ranging all the way back to his initial film 'Pit Fighter'.

Dan's Movie Report was of course first on the scene with a fresh review http://dansmoviereport.blogspot.com/2015/09/the-beautiful-ones-movie-review-dans.html

For More information on The Beautiful Ones, please go to the Official Facebook Page @ https://www.facebook.com/thebeautifulonesmovie/?fref=ts
Posted by Dan's Movie Report-Danny Templegod at 5:23:00 PM