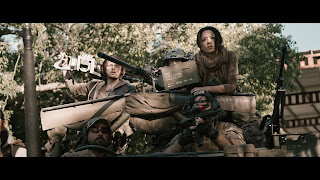 Above: Stephany as Amilia Chambers ready for action (C) 2018 Saban Films. For Promotional Use Only.

Greetings valued Dan's Movie Report readers. Today is a special exclusive interview all the way from Australia! Actress Stephany Jacobsen burned the midnight oil to conduct this interview. She chats in depth about her roles in the Terminator series and her new film Occupation! Get ready to go down under with the talented and sultry Stephany!

DMR: In a multi-part question, chat about working on The Sarah Conner Chronicles, what attracted you to the show, and how you got the role, and talk about your character and what she had to go through.

SJ: I did an audition, I read for Josh Friedman. He and James Middleton had seen me in Battlestar Galactica and they were looking for someone to play a love interest for Bryan Austin Green. I guess that the figured I would be right for the part. Let me just go ahead and say that Terminator and Occupation have been my two favorite roles. She was so cold and so detached, kind of unhinged, but in the most controlled way.

Jesse always had strength, she was always a soldier, a commander of a nuclear submarine. I loved the role, I had to find her character, in reverse. The producers and writers did an amazing job of reverse engineering that particular character arc for me. We all loved the show and the audience loved it, in retrospect however I think the show may have been a bit ahead of it's time. Actually Summer Glau and I were in a comicon in Melbourne and I got to be with her meet her family and introduce her to Luke (Sparke) 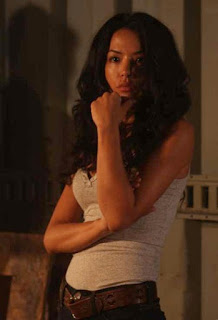 DMR: Thanks for that insight into that amazingly entertaining role, fast forward to 2018, your character Amelia in Occupation was my favorite, you had to go through so many emotions. The character had depth and range. Chat about your character, and what attracted you to the role.

SJ: Luke does not comment on female characters, and that is kind of like Josh Friedman. They both write female characters who do not need any concessions to be made. I saw that in Amelia straight away, and that quality in Luke as well. Although I played a somewhat similar character in Jesse, I never had to go through the complete range of being innocent, she is an engaged law student who is serving meals in a cafe, and by the end of the movie she is this warrior. I was really excited about the prospect of playing that arc. We had a meeting and we talked about the character and he talked about what he wanted, and I threw out the ideas I had about her and we were kind of instantly on the same page.

There was a point in the movie, you know the scene in the house, where the aliens come in and we have the first fight, he came to me and said this is where Amelia is at her most vulnerable. Interesting, as we were a couple of weeks into shooting at that point and I had been thinking when does she make that decision, when does she reach that chasm between being the waitress and the warrior? I was thinking when I should work it in, and he gave it to me. That became the moment when she flipped. At the beginning of it she was kind of cowering in the corner, hiding behind the mattress and then she comes running out with a hammer and haha knocks the alien flying. That was a magical moment. 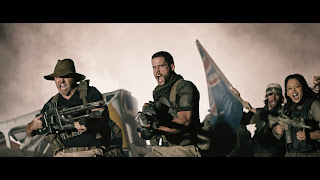 Above Photo: The group of intrepid humans ready for battle against the aliens in Occupation (C) 2018 Saban Films. For promotional use only.

DMR: I think the character that you portrayed could have been played by a woman or a man

SJ: That is exactly what I mean, Luke is a big Battlestar Galactica fan. Just like Josh from Sarah Conner Chronicles, they write the characters like that Starbuck etc...

DMR: I think Occupation was unique among alien invasion films in that it told a human story outside of the aliens and the invasion. When a character dies or is kidnapped I am sad, as they are established.

SJ: I agree in fact we see that from the outset. This movie is essentially about family, and the human spirit.

DMR: I agree, aliens happen to be the catalyst that drives everyone together. Incidentally, I liked the ending, it kind of ended without having to make a sequel.

SJ: No one thought we were going to make a sequel.

DMR: Any new films or TV shows that you are shooting?

We are actually going into pre-production for the sequel in a few weeks, yes as my voice-over at the end there is still pockets of resistance and aliens who do not want to get along with the humans. Like rogue units, so I have to go hunt down and find those rogue aliens. The battle rages on, but now it is them against us and some of them (aliens).

DMR: Ok! Cool! you are doing a sequel, I will get with Luke to do some sort of behind the scenes production blog. Last couple of questions, what is some advice you have to give to younger actors coming up in the business?

SJ: Just focus on being good, remember that this is a job, it is a profession. Regardless of how much weight you have lost or how many Instagram followers you have, what matters most is how competently you can do the job. Stay focused, stay grounded, one thing I think is very important for young actors is to have a sense of professionalism. That is something that is appreciated by everybody, at times it can be in short measure. Because of the nature of acting, many people do not treat it as a job, be a professional be fore you are a celebrity.

DMR: What are some of your goals in the next 5-10 yrs? Do you want to direct or produce?

SJ: I definitely do not want to produce, I have all the respect in the world for the producers, they have the most difficult job on the planet haha. I do not think my nervous system could handle it. I do not have any aspirations to direct, I may at some point write.

DMR: It was great talking with you Stephany.

SJ: Thanks so much for chatting Dan.