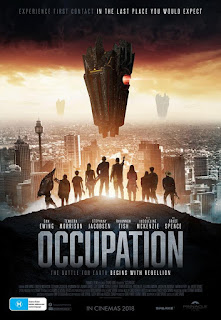 Above: IMDB poster for Occupation--

Greetings valued Dan's Movie Report readers. Across my desk from across the seas in Australia comes a brand new Sci-Fi/action/drama/romance film called 'Occupation'. Wait, Danny, how in the hell can one 2 hour film be all of those things? Ha, well leave it to the Aussie ingenuity and gumption to try to wedge a multitude of story subplots into the main story. Essentially 'Occupation' is a combination of 'Independence Day' and 'District 9'. Of course in 'Independence Day' aliens came and tried to destroy us and then take planet, 'District 9', was more of an enslavement thingy. Occupation has elements of both films, but actually does something different. As awesome as the other two films were, 'Occupation' does try to tell a human story, bringing a harsh reality over the top of the invasion. The story unfolds, and the major characters are developed, the audience is given a chance to get to know them, so when something happens it has gravitas and impact.

In order to review this film I watched it a three times as there is a lot going on, you have the gung-ho upstart kid, who wants to be involved, a couple with a baby on the way, that plays a major part in story development. As the title says Aliens do come and occupy, but the real drama is how the humans react to it, This is not the "RahRahRah" of killing it is a human story of struggle of survival. Perhaps mirroring the modern day world of Australia with the very wealthy and very poor, the farmers and the wealthy land owners. I know what my audience is thinking, did you really get that much out of the film, I will be honest, not at first, but after the third viewing 'Occupation' settles in and the hard work the cast and crew put in this film is evident.

Bombastic destruction, threats of poisoning our water supply, pushing limits of humanity, 'Occupation' breathes a new wind into the old alien invasion story. Director/Writer Luke Sparke manages to corral a great cast of passionate people to push hard and release a film to be proud of on a limited budget. Luke recognized the balance of character, and the ladies in Occupation are not just wallflowers and love interest they get in on the action, and drama. One of the highlights for me, as an action lover, was Stephany Jacobson's portrayal of a fierce but loyal woman who can fight, but also has a strong sense of family and community. Stephanie worked hard on this film and it is on brilliant display, exuding confidence and her heartfelt emotional outlook on the dire situation. She brings in that Sarah Conner Terminator 2 mentality, she is tough when she needs to be loyal, yet can be tender. Ms Jacobson is one to watch in the future. Of course the entire cast is amazing, they were well rehearsed and all of the emotional lines were delivered with passion and purpose.

I guess it is a pacing thing, very minor gripe about the urgency of the people when they reach an encampment. Chalking it up to trying to live their regular lives, yet, would have been interesting to see the entire film play out with the urgency of an alien invasion. Of course with that urgency, the audience has no time to slow down and smell the drama hah, so to speak, so it is a well worthy trade off.

Here is to hoping a copious amount of Worldwide Sci-fi and action fans will enjoy 'Occupation', as I did. Dan's Movie Report recommends this film as a must own at 8 out of 10, it does get better after multiple viewings. Kudos to the cast and crew on this one. Film had it's world unleashing at the Ritz Cinema in Sydney! Tuesday, July 10!

Watch for more exclusives, interviews, and more from cast and creators on Dan's Movie Report!