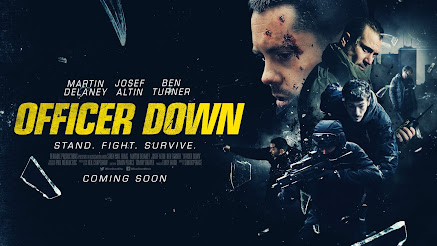 Above Image: Pre-release poster of 'Officer Down' from the Official Facebook Page, all rights reserved, image not monetized (C) 2020 Simon Pearce

Greetings valued Dan's Movie Report and Action-Flix.com readers. As most of my audience knows I am a judge on the fantastic IDTV Action Fest for 2021, my second year. Across my desk and my festival judging comes a brand new short film created by Simon Pearce. Simon is listed as the director and c0\o-writer of the project, Tommy Draper is the other co-writer.

'Officer Down' is a crime action/drama film that runs slightly over 18 minutes. Surprisingly, there is a massive plot development later in the film which I will now spoil, yet bears mentioning. Usually short films are proof of concept, 'Officer Down' rises above the mundane with a conundrum an occurrence that forces the audience to think about what they would do given the situation. A cop is pinned down and tortured and manages to escape, with the help of one of the bad guys.

The stark contrast colors, grays and dimly lit building evokes, pensive fear and anxiety. The cops are out maned, yet Wiley. There are many running and action scenes, not fighting, and much gun-play as well. By giving the audience more than 15 min, the movie has time to unfold the plot and draw the viewer in.

'Officer Down' is tight and well directed, each cast member including Martin Delaney and Joseph Altin, move through the film with panache and courage. Emotional reactions are visceral and it is obvious the director had a clear grasp of the message and tone he was going for. No one actor overshadows another. A smooth cohesive film, with virtually no filler.

I really hope this gets made into a series or feature. Obviously the end goal here is to obtain funding for a feature release, and it shows, the tone is serious and violent, yet having an intrinsic message. Overall 'Officer Down' is quite good, actually surprised me, and is worth multiple viewings and rates an 8 0\out of 10, yeah it is that good! Incidentally the film should be shown at the IDTV action fest as it is already entered. For more information on the festival: http://www.idtvactionfest.com/

For more information on Officer Down, please visit their Official Facebook Page: https://www.facebook.com/OfficerDownMovie 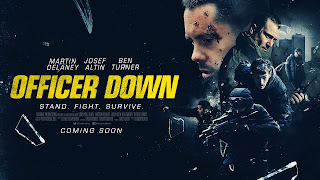