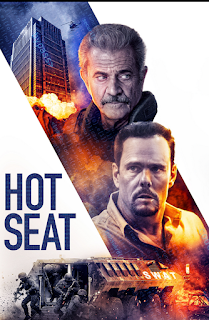 
Greetings valued Dan's Movie Report readers, across my desk comes a new thriller from LIONSGATE entitled 'Hot Seat'. The title explains the movie as a computer hacker is trapped in his office chair with a bomb under his seat. He has to hack into a secure vault area for a deranged madman who is basically just a voice over a loudspeaker, growling instructions and threatening his family.

'Hot Seat' is a taught cyber thriller, never wavering much from the central plot of a hacker and his manipulator going through the various tasks that he is supposed to perform. Slight of hand and a mis direction play a big part in this film, but to be honest, I had a suspicion what was going on, yet it was well disguised. No spoilers, but the ending is quite entertaining. Unlike the Sandra Bullock mess 'The Net', this film has teeth, and actions have real consequences!

Veteran actor Mel Gibson plays an aging bomb tech named Wallace Reed, although not very agile, has his mental prowess in tact. His partner is is young, always challenging him, yet has respect for him. Although 30 years passed his Lethal Weapon days, Mel is always quite engaging to watch on screen, sardonic, sarcastic and seemingly always ready for action.

Actress Shannen Doherty plays a chief of police named Pam Connelly. Actually it is very cool to see her acting, as going through cancer treatments and health challenges is so hard. She did what she could in a limited, non action role.

The other acting is decent, yet I did not care much for actress Katy Katzman as Ava, actually I do not think it is her fault. The writers made her like the dumb blonde, which is really unbelievable considering she works in the management of a building with security clearance. In my opinion her character is superfluous to the main story even though she is kind of inserted into the room with the chair bomb. She does help somewhat, so all is not lost, but I kind of wish the writers just made her with above average intellect, rather than a stereo type..

Going back to the story, complaints aside, did grab my attention especially the final 30 minutes. Simple story, basic office backdrop, nothing too far out of the ordinary, but an astute eye will kind of see what is going on. The film hits a breakneck pace with a twist, especially when the action finally moves outside the office, again no spoilers.

The behind the scenes aspects of the film are solid, well lit, decent tense music, creative camera angles make this a slightly above average thriller. Worthy of a streaming watch, 'Hot Seat' drops on various platforms on July 1st. I am on the fence about rating, the ending bumps it up to a 7 out of 10 though.

For further information please visit the official LIONSGATE site for the film @ https://www.lionsgate.com/movies/hot-seat