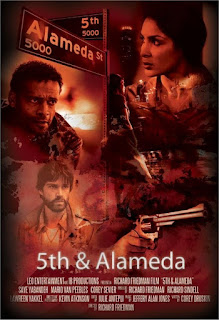 Greetings valued Dan's Movie Report readers. Across my desk today comes a film that actually was filmed a decade ago, but I actually knew very little about. Thanks to lead actress and Executive Producer Saye Yabandeh, I was given the opportunity to view this very powerful and thought provoking film. Although this film apparently is available to watch on Plex, I feel that the film is important enough to review and actually should enjoy a second resurgence in 2022 in light of the recent events.

Lead actress Sayé Yabandeh portrays a woman in crises, yet her situation gets far worse when she is (Minor Spoiler) raped and then eventually shot, these events happen early in the film but what

happens next is a master class in character study on the possibilities of turning on your attacker or turning them in. The 122 minute film seems to run a trifle long, yet it weaves and intricate tale of what ifs. '5th and Alameda' was the address where she was shot and the robbery took place, yet her life and the back drop of a culture of the middle east that is severely limiting towards women, make for a purposeful and erudite production that will stay with the audience far after the final credits role.

Sayé Yabandeh's Sara is an empathetic character full of conflicting emotions. Throughout '5th & Alameda' we see her with shards of memory from the rape and shooting, but she never quite remembers everything, the physical and emotional pain stay with her throughout the film. Her acting is on point here, ranging from scared and demure to raging and fighting back, I really liked the change and her eventually standing up for herself. I hope in 2022, women stand up for themselves in November, and for the foreseeable future or more rights will probably be taken away, but that is not my place to comment, I am obviously not a women.

As an American citizen, I have no ideas the horrors someone like Sayé Yabandeh has faced being born in Iran, especially as a creative thoughtful person. Being a female producer is hard enough and '5th and Alameda' is a monumental achievement in important programming. Actor Corey Sevier as Derek and Mario Van Peebles as Trevor, are both well cast and have the emotional investment to handle a film such as this. Director Richard Friedman and writer Corey Druskin weave a solid tale and never allow the audience or the actors to stray far from the dire and sorrowful subject matter, '5th and Alameda' is not a happy film, yet maybe it will change people's mind about the creativity of Iranian artists.

Sara eventually turns on her attacker and the plot thickens so to say, and I will not spoil it. Saye the actress seems strong and self assured, so I am believing she could turn the tables on her attacker if need be! The attacker gives her the choice and she makes it, trust me watch the movie as it unfolds to see the results!

I enjoyed the various settings and camera work as well from '5th and Alameda' time was taken obviously to frame the shots, to have the actors either look angry, scared, remorseful, relieved,... Actually nearly every human emotion is on display in this film, much time was taken to learn about the characters thoughts and motivations even with the story being told through at times a series of flashbacks. This can be explained as only partial memory of the event from Saye's character is occurring.

Overall, because I watch many indie and foreign films, I am used to this, I rate the film a very strong 8.5 out of 10, a must watch for fans of foreign and indie thought provoking films. I am assuming the target audience is not 100million dollar USA summer block busters, with little plot, thus my rating is based on the scope and scale of an indie production. Respect to all involved, hopefully later in 2022 I can interview Saye and get her thoughts on this film and her humanitarian work.