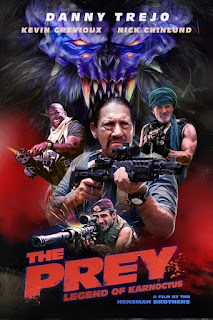 Above Image: The Prey Legend of Karnoctus official poster: All Rights reserved to the original owners, image used for promotional purposes only, not monetized.

Greetings valued Dan's Movie Report readers. Across my desk today comes a thriller in the vein of Predator but has the claustrophobic fear of the original Alien film. Synopsis: Synopsis: In the Afghanistan desert, a group of mercenaries out for treasure complete their greatest heist. Seeking refuge from the hunting Taliban in a nearby cave, they are soon joined by retreating US soldiers, and both groups are trapped within by a rocket explosion at the cave’s entrance. The newly joined parties need to work together to find an escape through the labyrinth but soon realize they’re being tracked by a deadly beast that local legend calls Karnoctus; and they have become… the prey.

The film has a killer opening scene, then pans to a firefight. I kind of hoped the pace of the film would stay rapid, Actually 'The Prey' just ends up as a cat and mouse game between the soldiers and a monster in very dim light. Here is the issue I had, we see the monster far too early in my opinion to establish fear, more like gore scenes, if that is your thing. The soldiers have hallucinations as well, although I am not entirely sure how and why they came from and not everyone has them.

Incidentally the acting itself is decent enough, no one is just phoning it in, and the actors seem to show genuine fear when the monster is near. Since they are in a cave lighting is not the best, and that is to be expected, when we see the views from the vision of the monster it is more like a visual representation of heat, which separates it from the view the soldiers have. Costuming is sandy, distressed military, so that base is covered, again, nothing to detract. Respectable behind the camera work, given the limited budget.

Musically though I am not a fan of rap music which is prevalent, I thought that the music and sounds used when the monster was approaching set the tone. I probably should not even comment on the music in the film, but I feel that if you do like rap, you will like it more. OK, enough about that, the dialogue though is quite clear and easy to understand, the actors project their voice fine, and if ADR was used it is barely noticeable.

The soldiers move through the cave as the original opening was caved in by an explosion. The middle hour of the film is kind of slow, but the last 15 minutes are full of action, Almost makes up for the slow parts, actually would have been cool not to see the monster until the end, but I guess the filmmakers wanted to establish that the monster, which looks like a big-foot, is actually chasing the soldiers.

Just be warned, although Danny Trejo is in the film it is nothing more than a very small opening cameo. That said, if anyone in my reading audience likes low budget monster films, 'The Prey: Legend of Karnoctus' is not that bad, campy and they tried their best. Directors Cire Hensman and Matthew Hensman do their best with the limited budget, and they even tease that a second film is coming, so perhaps with a higher budget things will take off. Overall, though I wanted to like 'The Prey: Legend of Karnoctus', the film is average though, perhaps a rating of 5.5 out of 10. I did like the ending trailer showing some behind the scenes, including some story-boarding, so obviously with a bigger budget, they are ready for a part two, I will state that I am looking forward to what the Hensmans come up with next!