Good Monday morning, lots to report, time to shoot straight into it. 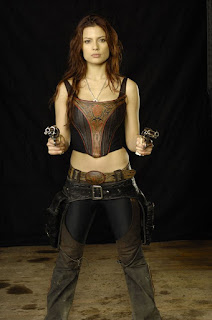 Natassia in Bloodrayne: Deliverance. She shoots from the hip, and looks great doing it!

Actress Natassia Malthe is currently in Malaysia working on a new film from Epic Pictures called Vikingdom. She plays the character of Brynna. The film is expected to release in December 2012 and spins the tale of a warrior facing a god of immense power. check the IMDB link @ http://www.imdb.com/title/tt1785669

Natassia has been in several films including, Elektra as Typhoid, and the last two Bloodrayne films. She is a multi-talented actress who also is the co-founder and director of US operations of the Touhoku Daishinsai Expat Relief Fund (TDERF) Malthe can currently be seen in the new In The Name of The King 2: Two Worlds, which releases in early January 2012.

Actress/Silat Master/Singer Cecily Fay reports she working an a new album. Fay is also putting the final finishing touches on her feature film Warrioress, which should have a cast and crew premiere sometime in Feb 2012. Fay's Silat school is still going strong, check her website link at the side of the page, for more info. 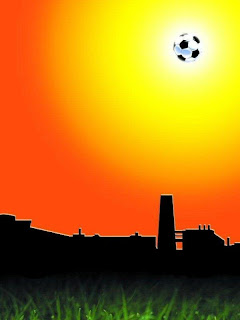 Director/Writer Ross Boyask reports that he has completed second unit filming on The Magnificent Eleven a film that has this unique description. "A modernization of the classic western in which the Cowboys are a struggling local amateur soccer team, the Indians run a nearby Tandoori restaurant and the bandits are a group of menacing thugs led by a maniac known simply as 'American Bob'." The film is set to come out at the end of 2012.

Master Cary-Hiroyuki Tagawa has an informative website available for all to join, a network of folks interested in the martial arts, writers and gamers. The site is called Shang's army, (named after the Mortal Kombat character) Slice your browsers over to https://www.shangsarmy.com/socialnet/

Director/Writer Kantz is back in LA and look for his interview in early 2012. In the mean time check out his Wasteland currently on home video.

Above pic: Eileen Daly from her FB page credit on image

Sultry actress/singer Eileen Daly reports that she is working on new music and she has an updated site for her band The Courtesans at http://www.thecourtesans.net/index.html Look for her feature interview in 2012! 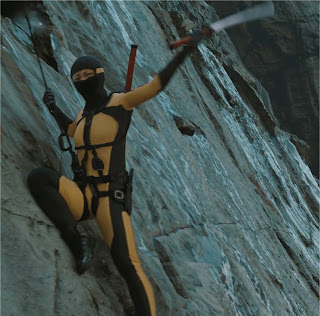 Even on a mountain top you are not safe from the deadly Ming, as she stunt doubles for the Jinx character in GI Joe. Screen Cap: Danny Shamon (Image (c)2011 Hasbro/MGM)

Lovely and talented Stuntwoman/Martial artist Ming Qiu has completed work on G.I. Joe 2 and reports that she worked hard to train actress Elodie Yung to do her own sword work. She was on the set for a few months training and Ming can be seen in the Yellow jumpsuit in the new trailer! I have to say it, Ming kicks ass, and close to five dozen films to her credit. Look for new interview in mid 2012! 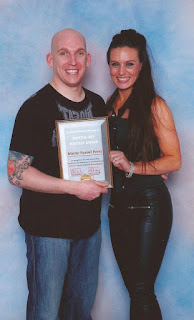 Russell Perks and Zara pose for a shot, from Russell's facebook page

Sensei Zara Phythian recently had her student's graduation and awards ceremony for her Personal Best Academy and had Sensei Russell Perks as one of the featured guests. Russell has his own academy as well, check his website at http://www.rpmaa.com

(For Zara See PBA website link on side of page and banner at the bottom of page) Zara is a fantastic teacher of the arts and excels in all of her endeavors. In 2012 she will be starring in several new projects including Iron Monk and a full length feature of Sim Card. 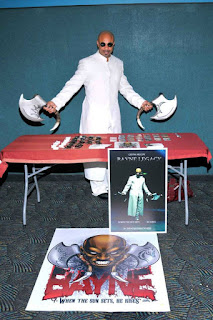 Above Pic: From Chyna's FB page

The multi-talented Actor/Stuntman/Producer Chyna McCoy is hitting the convention circuit promoting his Bayne film concept with a full marketing plan. He posts this pic on his facebook page in full costume and gear even including some cool Bayne sunglasses.

Dean Meadows is moving forward with his Friday's Child film concept through Pentagram Pictures. Check the Facebook page at https://www.facebook.com/#!/pentagrampicturesofficial

So far the interview list for 2012 is growing, please note that the interview schedule is subject to change, or cancellation, and I try to have them coincide with the release of a film the subjects are in. Here is the list current of people I plan to interview in 2012: Kantz, Eileen Daly, Cynthia Rothrock, Cary Tagawa, Ming Qiu, Ross Boyask, and Jesse Johnson.

I am working on a couple of other surprises, so keep checking the site for details! Whew that was a lot of news! I am over and out, have news send it!
Posted by Dan's Movie Report-Danny Templegod at 9:37:00 AM