In The Name Of The King 2: Two Worlds Movie Review 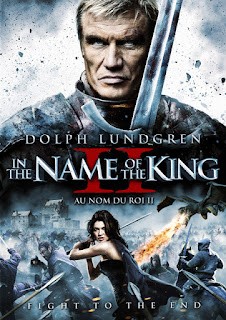 This 2011 sequel to the 2007 Uwe Boll sword action flick is one of those puzzling films that is not sure where it wants to be, or what it wants to be. The opening of the film the audience is thrust into a forest with a pair of assassins chasing a sorceress. she runs across the forest, kills them and then runs right into the present day. Then We see Dolph Lundgen's character in a Dojo teaching kids. He goes home after teaching and boom that same woman and two assassins appear in his house, and the soceresss opens a portal to go back in time and he becomes the chosen one.

Ok I am lost, the bad English, hokey dialogue, and why is he the chosen one? The fight scenes are good, but the speaking parts are so ludicrously bad it is quite comical. The movie tries to explain itself, but just is silly. After meeting the king He is put in a room to sleep, with a cute harlot. He does not require her services as he is tired. Then in his sleep boom she tries to kill him, huh makes no sense. 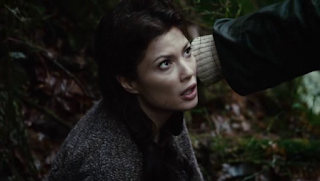 Strangely enough this movie although bad it has some merits. Natassia Malthe as Manhattan does a good job portraying her character given the muddled and ambiguous script. The dialogue pokes fun at itself and is at times mildly amusing. Malthe is a treat to watch, even though this particular film didn't give her the proper vessel to hone her craft. She has a clear speaking voice and tries to inject an air of importance to their quest to find out why he is the chosen one.

Dolph is decent, but it is obvious he wasn't fully embracing the script. He delivers his dialogue with a smirk at times, underlying a sarcastic tone. There are a few fight scenes, and in those Dolph shines. The fights are kind fun to watch even though there is little blood, and the edits are quick. 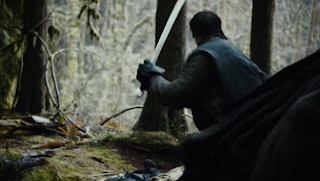 Above pic: A scene from a battle In The Name of The King Part 2

The sets and scenery are all over the place, even a modern clothing cabinet in his sleeping room huh!?!. The forest looked a bit washed out, the colors did not pop on screen. I am assuming these were budgetary constrains.

This movie is hard to rate, I cannot recommend it for more than a marginal rent only because of the action. I rate it a 4.5 out of 10.
Posted by Dan's Movie Report-Danny Templegod at 12:04:00 PM